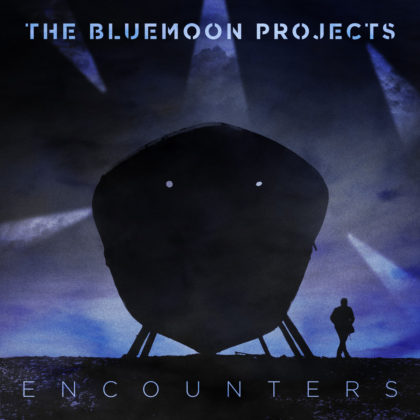 The Bluemoon Projects first introduced themselves with a promising demo back in 2015. Back then, they were essentially the solo one man project of Greek musician Kostis Filippopoulos.

Since then and after some unofficial home recordings, the whole project acquired the character of a regular band in 2020 with the addition of Leon on bass and guitars and Nikolas Nenedakis on drums and percussion. Kostis Filippopoulos has taken on vocals, guitars and keyboards on the band’s debut album Encounters under the moniker MoonLoop.

Fresh sound with a lot of memories

Encounters is a concept album that tells a sci fi story of someone who comes into contact with aliens and is given the opportunity to leave Earth and join them. With the idea of a single story, they want, as they say, to honor the tradition of prog / art-rock concept albums.

Sonar which opens the 42-minute album consisting of seven compositions is a beautiful atmospheric ambient composition. Devolution in its introduction and in the way the vocals are placed on top of the music reminded me of several modern prog bands such as The Pineapple Thief and Gazpacho. A second beautiful composition in a row, so the ten minutes of Alien Talking that follows is a challenge. The song builds gradually, with choral vocals at the beginning, melodic guitars and ubiquitous keyboards and synths. The guitar solos directly refer to the style and sound of David Gilmour. After all, Gilmour-era Pink Floyd and bands influenced by Floyd are the main influences in BlueMoon Project’s music. The same goes for Dress Like Me with the echo of the lyrics that are a direct reference to Floyd. This song also reminds something of the way Anathema embraced sound of Floyd in Alternative 4.

However, when the rhythm guitars become sharper, then Porcupine Tree’s influence is more evident. Even band leader Kostis Filippopoulos ‘ nickname MoonLoop is probably a reference to the song Moonloop from The Sky Moves Sideways.

The vocals are by no means exceptional, but on the other hand they are not bad either. I would rather say that Kostis is very careful, singing within his capabilities. There is a nasal tone on the high notes with the successful addition of some effects.

The mid part in Eden would make me swear I’m hearing references even to Greek artists like Last Dance / Dimitris Papaspyropoulos, but also works like Constantinos Beta’s excellent album 2. That is, influences from the alternative electronic sound based on the creation of atmosphere and nostalgic melodies. Such are the acoustic guitar melodies on T-minus before it evolves into an extroverted indie song. One of the most special and beautiful moments of the album.

Hypersleep, which completes the album, is a dreamy, hypnotic composition that will bring to mind the early recordings of Porcupine Tree, but also the aura of a Jeff Buckley.

The good thing about Encounters is that it flow nicely, without any weak part. All compositions have homogeneity and stand at a very good level. One could say that maybe the production could be sharper, that their influences are too obvious, but personally that whole lo-fi aesthetic wins me over with whatever romance it hides.

After several years as a demo solo project of Kostis Filippopoulos (MoonLoop), The Bluemoon Projects take the form of a three-member band and finally release their full-length debut album. The two new members add an orchestral depth to the final result, while the production -although not perfect – enhances the album’s compositions. The style directly refers to the first period of Porcupine Tree and of course Pink Floyd. The 90s alternative prog element gives a single stylistic stamp to The Bluemoon Projects’ music, which is also one of their main strengths. Creating an atmospheric trippy framework is one of the main purposes of the band, with a strong storytelling and songwriting. Although there is clearly room for improvement in the production and the technique, the main purpose of the album was achieved. The Bluemoon Projects now have official discography, reminding us of a great era, from which less and less musicians choose to draw their inspiration, unfortunately.