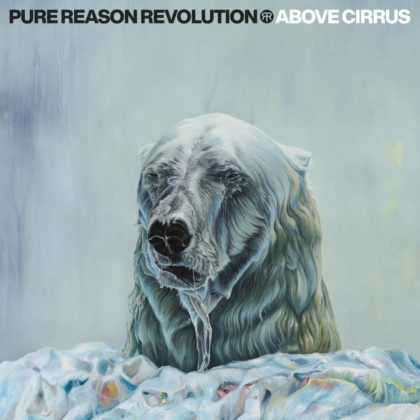 An album for today and forever

Eupnea was inspired by Jon Courtney’s experiences after his daughter was born two months premature. The creation of Above Cirrus coincided with the SARS-Cov-2 pandemic and the quarantine that followed. In an interview, Jon says: “My lyrics are often about relationships and relationships are being re-examined more than ever in this time of Covid, one moment we can be tender and loving and a few moments later it’s a completely different story”. To add that the lyrics on many of Above Cirrus’ tracks “deal with this relationship thing.”

And so the first thing we hear when the album starts with Our Prism is: We were trapped in the prism… But it was our prism, no others. Our safe place…The record starts dynamically with a track where Chloë Alper’s ethereal vocals alternate with the dynamism of Greg Jong’s guitar. Its first form was recorded remotely due to the pandemic and according to Courtney himself it is one of their grungiest tracks with influences from Smashing Pumpkins and Nirvana.

Next comes New Kind of Evil, a clear reference to the pandemic and the new, uncertain reality. This piece is strongly reminiscent of Pink Floyd. It starts with melancholic guitar and piano melodies, sad vocal lines and atmospheric sounds that then turn into a flurry of waves of guitars, drums and vocals. And tidal waves spin, new kind of evil burns here. According to Jon, in addition to the reference to the pandemic and this “primitive paradox”, there is another metaphor. The calm and wild alternations that exist in this song reflect the weaknesses, strengths and stresses that exist in human relationships. Things that came to light when we were forced to confine ourselves to a narrow and small habitat due to the quarantine.

Phantoms is the most danceable track on the record. Electronic sound, dynamic riffs and strong drums combined with the characteristic vocals of Pure Reason Revolution. The track ends with an eerie melody and α ναρρατιον with rhythmic drums that continue into Cruel Deliverance which deals with the theme of mortality, which is reflected in the melody of the track: eerie keyboards, sad guitars and sharp drums. It’s the sad realization that even though traveling to meet with loved ones wasn’t as easy. And this gives way to the dreamy Scream Sideways which, as Jon states, was an early influence on Clubbed to Death from The Matrix, which indeed has the same swings and a similar funk element. The dreamy vocals give way to electro ’80s keys and rhythms full of tension. In ten minutes the rhythms and melodies change and alternate constantly. Geoff Dugmore’s drums are amazing on this track. Dead Butterfly starts off very melodic and sad, but it’s one of the most dynamic tracks on the record, as melancholy alternates with intensity throughout the track. One of my favorite songs along with Phantoms, and I think that’s what Pure Reason Revolution is: that switching of rhythms and emotions that bears the band’s own stamp. The album ends at about 45 minutes with Lucid with similar rhythmic and melodic shifts.

The release of Eupnea was one of the biggest surprises of 2020 and was and is of my favorite records. On Above Cirrus Pure Reason Revolution are again at their best, with all their key features: excellent production and sound effects, vocals overflowing with emotion, the dual vocals of Jon and Chloë, dynamic guitars, sharp and clean drums, a strange dance mood and electronic sounds in the background.

The album’s artwork – created by Jill Tegan Docherty entitled Deaf Mute – is also beautiful, a sad polar bear while the ice around it is clearly melting. And the present is a different world, with different normalities than what we are used to and a new kind of evil all around us…

Pure Reason Revolution’s Eupnea in 2020 was a very pleasant surprise. With the spirit of their beloved debut, The Dark Third (2006), as a guide, the British band returned this year with Above Cirrus, once again through Inside Out, and it is now clear that the return to their progressive rock roots was a conscious choice. Overall, the record sounds like a loose concept album related to our world in the post-pandemic era. The band revisits the more alternative side of their sound and the familiar recipe with electronic elements perfectly combined with heavy guitars, the band’s trademark dual vocal harmonies and prog / art-rock with pop elements in the vein of Porcupine Tree. Overall, Above Cirrus is absolutely enjoyable as a whole and just a bit weaker than Eupnea, but more importantly, Pure Reason Revolution are back in full swing. Favorite tracks: New Kind Of Evil, Scream Sideways, Lucid.