As I was finishing writing the first part of “Prog rock and cinema’s alliance” (click), I had made a promise that there would be a second part with much more progressive music and many more cinematic references.

The progressive rock movement was present in Greece during the 70s, at a time when the “Greek Hollywood” of Finos Films was at its creative peak. Nikos Koundouros, a rather unconventional director, heavily influenced by the innovative spirit of the French Nouvelle Vague, shot the movie Vortex in 1967, a film in which Aphrodite’s Child’s Four Horsemen is heard at some point. I can’t say with absolute certainty whether the great Greek prog band wrote the music for this film or the director simply used the piece (the latter is much more likely). Even so, the whole thing is very innovative, as such artistic choices in Greece at that time really seemed curious, to say the least. I do not have much to say about the film. It’s a work that balances between the French “New Wave” and Greek tragedy, with many naked scenes shot in Crete. A spider-woman captures men in her web and crime does not take long to appear… 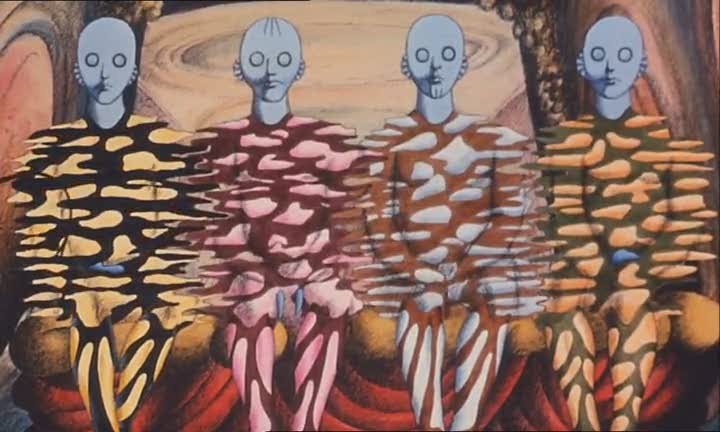 1973, France. From a cinematic point of view, art met perfection in this country, especially in the 1960s and 1970s. To analyze this point of view, someone would have to write about a dozen articles, and this musical and cinematic magnum opus is a great example. It’s none other than the surreallistic animation film La Planéte Sauvage by cartoonist René Laloux which was produced by horror master Roger Corman. If someone’s looking for some kind of “escape”, and any kind of srtistic enjoyment, he/she can watch this cult, allegorical masterpiece and let the genious Alain Gorageur (Serge Gainsbourg’s longtime collaborator) guide him/her around the “Wild Planet” of progressive rock, a planet dominated by Gorageur’s moog.

Words can’t easily describe this incredible album. The production, the sound and the influence of the whole project can be heard in modern bands such as e.g. Air, while the la Isaac Hayes blaxploitation guitars are evident throughout the soundtrack.

And a few words about the film: on an undefined planet, giant creatures are in command, while humans are trying to escape and there are (as always) some rebels. The film can allegorically be interpreted taking into account the occupation of Czechoslovakia by the Soviet Union and what followed…

Does anyone remember Patrick Moraz? The Swiss keyboard wizard replaced Rick Wakeman and played in Yes’ Relayer, and was a member of The Moody Blues from the late 1970s to the early 1990s. Moraz was also involved in some movie soundtracks. One of them was the music for the classic – albeit somewhat overrated – 1980s slasher film, The Stepfather. The script is about a father who, although he seems affectionate and kind, has a very dark past and is just as suspicious as his new family. But what impresses most is the film’s music, which is extremely atmospheric, although it’s full of these classic and… inevitable 1980s keys sound.

Finally, since we are talking about 1980shorror movies, I have to add an amazing composition, which has a strong progressive rock element, written by Michael Perilstein and can be heard at the end credits of The Deadly Spawn.

If you may wonder why there was not any reference to Popol Vuh and their collaboration with Werner Herzog in some of his films… well, this will be included in vol.3!

“The kids with long hair and black clothes”: Greek progressive rock 1967-1985. Part I: The youth, the tradition, the mythology

Wednesday November 17th, 2021 Hokam Comments Off on “The kids with long hair and black clothes”: Greek progressive rock 1967-1985. Part I: The youth, the tradition, the mythology