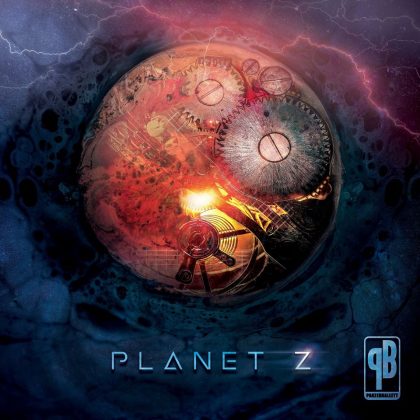 Although Panzerballet are far from being an ordinary band, Planet Z has gone one step further. In particular, the mastermind, Jan Zehrfeld, chose to include original compositions in his seventh album of the German band, as well as covers of compositions by Nélida Béjar, Martin Mayrhofer, Leonhard Kuhn, Jeff Novotny, Richard Wagner, Andy Lind and Simon Backes and many surprises in the rhythm section. A whole handful of world-class drummers from the circle of prog, jazz and fusion legends such as Frank Zappa, Devin Townsend, Meshuggah and Allan Holdsworth, will be performing on Planet Z. And Jan Zehrfeld succeeds in combining rhythmic lunacy and compositional shamelessness in one “unheard of” album. For what Jan Z does together with drummers Marco Minnemann, Virgil Donati from Planet X, Grammy Award winner Morgan Ågren – ennobled by Zappa, Gergo Borlai from Tribal Tech and regional representatives Hannes Grossmann (Blotted Science – and Andy Lind on Planet Z is simply brimming with “unheard of”.

Planet Z is undoubtedly the most ambitious step in Panzerballett’s career. Or is it much more than that?

There are many times when an artist has a couple of good ideas and develops songs around those two ideas. If the artist is skilled then they manage to capture the attention and imagination of the listener for 40 50 or 60 minutes. And all of that from a couple of good ideas that give the seed for an album. That’s not the case for Panzerballetts’ Planet Z. In their case the amount of ideas could be counted in the ideas per minute scale. Partly, because of the mind of Jan Zehrfeld but also because of the sheer amount of talent that he amassed for this album. Six drummers: Virgil Donati, Marco Minnemann, Morgan Ågren, Gergo Borlai, Hannes Grossmann, Andy Lind. Three saxophonists: Florian Fennes, Sam Greenfield and Georg Gratzer. Bass, piano, extra horn sections for a track and of course Jan’s guitars.

Most of the songs in the album are actually covers from avant-garde and classical music composers. The opener Prime Time is an appropriate introduction to the tightly packed jazz fusion with the drums leading the way for the guitars and saxophones to riot in. Marco Minnemann sits in the next song Who the Jack is Migger, a more heavy metal song that has the saxophone leading many times. In the same spirit we have Mind Your Head that in between the heavy breaks has a nice melodic and almost catchy saxophone that actually helps as a breather. Morgan Ågren’s drums are astonishing, especially during those saxophone breaks.

By this point, one remarkable aspect of this album is apparent. Even though between songs many musicians change and the composer changes, at no point do you seem to lose cohesion between the songs. A testament to the talent of the musicians and the engineer who sat behind the console.

No One Is Flying the Plane is great heavy jazz song with multiple big band jazz breaks something that gives it a nice Whiplash (the movie not the song) feeling. Walkürenritt or Wagner’s Ride of the Valkyries bring us to the middle point of the record. If there was any doubt as to why this composition and Wagner in generally has been a favorite among heavy metal fans, then this cover will resolve any of them.

The playfully named Urchin vs Octopus is the bulkiest and mot (relatively) straightforward song of the album. Alle meine Andchen is where things turn into more the autistic side of prog. Many bass and guitar breaks in a song that could easily be part of a Spastic Ink album (minus the keyboard solo). Coconut is a song written by Simon Backes, a student of Jan Zehrfeld, and you could definitely see the influence. Heavy jazz with a great saxophone lead and a guitar solo.

SOS closes the album and even though it is an original composition, the concept is similar to that of Rush’s YYZ. An exciting rhythm pattern that was inspired by the morse code for SOS. An approprate ending for a heavy and densely packed album.

Take a piece (jazz piece, metal piece, doesn’t matter), break it apart and put it back together again. That’s what you get when you listen to Planet Z. It is definitely a heavy album, but not an album you can headbang to, as the rhythms change far too much and far too often. It is a jazz album, but not an album that can work as background music. It is something in between that requires the listener’s full attention. And if the listener gives the attention required, he/she will be rewarded.

The highly praised German jazz metal band Panzerballett is back after three years of silence, with their new record, Planet Z. The album is somehow different from the band’s previous work X-Mas Death Jazz, and somehow not. There are death metal growls this time, but again it’s an insane performance of avant-garde, metal, and jazz fusion style with Zappaesque elements. The album offers an ambitious material filled with nasty fusion riffs and saxophone passages. With the addition of guest drummers, Marco Minnemann, Vorgil Donati, Gergo Borlai, Morgan Ågren, Hannes Grossmann, and Andy Lind, there is a bit of a new angle in some of the songs. The musicianship is simply on another plane of existence. The tone is hard for a lot of people to get into, but if you’re familiar with a good array of contemporary classical, metal, and jazz, this will prove a fun album to listen to. Jan Zehrfeld’s idea of recording songs by different composers by different lineups, and trying to create an homogeneous album worked just perfectly. Planet Z‘s material is tight, complex and impeccably played instrumental music. Professional music school.