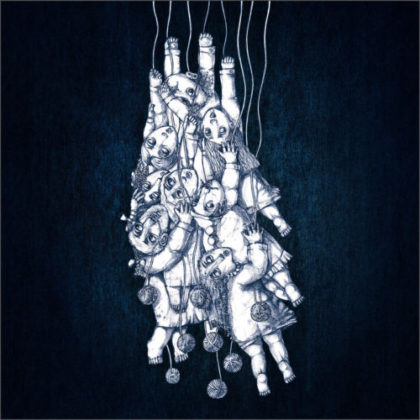 Have you heard of Octavision? Most likely not, and it is not surprising as they have just released their debut full-length album.

When a supergroup honors its characterization

We have been endlessly bombarded with progressive metal supergroups (let’s thank Mike Portnoy for several of them), most of which are shooting stars or no stars at all. Although Coexist was released late last year (December 29th), Octavision proves that supergroups still have some hope.

And how can it be otherwise, when you manage to hire the great Victor Wooten to play progressive metal? But to be honest, there is enough jazz / fusion material and believe me, we are talking about dense and diverse music. It is no coincidence that the songs had been thoroughly worked for 10 years in the mind of Hovak Alaverdyan who impresses with his playing skills and songwriting. In less than an hour we receive multiple stimuli and excellent technique; even the musicians themselves referred to the complexity of the whole project in their interviews.

Coexist is basically an instrumental album except for the compositions Coexist and Apocalyptus with Jeff Scott Soto on vocals, who still has a great voice despite the relentless influence of time. According to Hovak Alaverdyan, the wind instrument Blul was used for the first time in the history of the genre, which gives a clearly oriental aroma and a commendable variety in the sound. Listen to Three Lives, a masterpiece with a dominant fusion character, with Victor Wooten proving why he is considered one of the top bassists in the world. This is one of the most mature and high quality compositions of the year (past or present, as you wish translate it). We also hear a qanun or a similar instrument in the album opener, Mindwar. Special mention should be made to Billy Sheehan who performs flawlessly in Coexist. The truth is that it is not clear which bassist plays in which piece except Three Lives and Coexist due to the video clips.

The guitars have a pretty aggressive sound, groove, and the corresponding distortions which reminded me of Symphony X (from Paradise Lost onwards), but the fusion element is very important on the album, and thus Liquid Tension Experiment and Nova Collective come to mind. The work here is extremely meticulous and the melody is balanced by the guitar solos or the keys. The songs breathe and the musicians are all perfect, there is no obstacle in the galloping thing titled Octavision. Α great example is the construction of the last track, So It Begins which starts dynamically, the Blul blows a wind of change and drops the speeds a bit before the rhythm section decides to give its own color. The record is as well-played and well-tuned as a Swiss watch.

Although it is not the most accessible sound, the album’s prog metal character somewhat alleviates the situation. Metal fans will surely appreciate Coexist, Proctagon and Apocalyptus, superb dynamic compositions that are a progressive delirium but do not expand the experimental limits. In the end, this album aimed at metal fans rather than the fusion audience.

Personally, I have no complaints about this great effort, I might like to hear more of Jeff Scott Soto, because his voice matched the content and although being a fan of heavy sound and all the distortions used by the Armenian craftsman, some might like a little clearer sound in some places. But all this is minor for a debut album which paves the way for the Octavision’s success like a roller coaster. It will be criminal if this record is ignored because it is really great and will be part of my list for a very long time. I hope it’ll also find a place in yours.

Coexist is the debut album by Octavision, a project of guitarist and composer Hovak Alaverdyan which includes the collaboration of some of the top prog musicians. The album contains 7 adventurous instrumental prog metal pieces and 2 songs sung by the great Jeff Scott Soto. The record caught my attention for the powerful demonstration of musicianship skills of all band members, the great songwriting and the catchy melodies. Everything is really tight and yet groovy, like a liquid in a constant stream. Billy Sheehan’s basslines are grooving the whole time, especially when he gets his solo moments in few of the songs. Hovak also added some of unique Armenian traditional folk instruments, and that gave a whole new flavor to the album. Coexist is exceedingly pleasant, vibrant, and full of life. Best of all, it doesn’t get boring after the middle as do many mainly instrumental album released in recent years. Absolutely recommended for all fans of the prog metal genre.

The Rain I Bleed