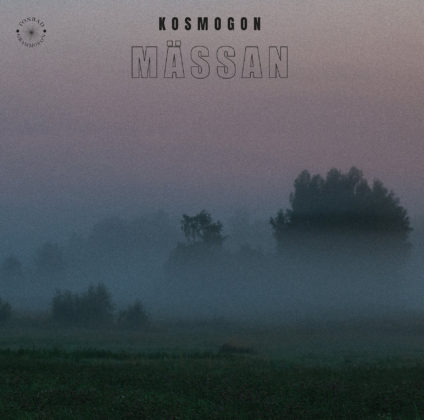 Kosmogon is a new progressive outfit featuring Anekdoten’s Nicklas Barker and pianist Sophie Linder. Barker comments: “Mässan (The Mass) started with a sound, a drone that I had made on a vintage Logan String Ensemble with a phaser and an echo device. When Sophie heard it she started to build around it.”

Between the recording sessions in our cottage up north we took walks in the forrest. Hearing the sounds of nature we felt like Mässan should sound like the creatures of the night gathering to worship nature, and that’s the title: Mässan – composed of the heritage from the melodicism of old Swedish church music, electronic music from the 60s and 70s and sounds from the beautiful Swedish nature.”

Old school electronic music from the depths of Swedish nature

Mässan is the result of a very interesting collaboration between two music worlds, with the footnote that Linder is the one who moves away from the norms of her classical education to get closer to Barker’s world. This dynamic of the collaboration called Kosmogon, is the one that gives life to the two long compositions of the album.

The musical vision of the duo draws its foundations from the German electronic scene of 70s, tapping into the vast landscapes of the Berlin school on the one hand (Klaus Schulze, Tangerine Dream, etc.) and the nature-loving new age quests of Popol Vuh on the other. The two pieces have a key difference that sets them apart. The title track seems to have a structure all along, while Somnus invests more in creating a certain atmosphere and brings to the listener the sense of random development. The conditions under which the two musicians created the album are evident in both tracks. The listener receives their emotional state as it is, but also their communication with their natural environment. In this sense, Mässan is a successful release.

The main disadvantage of the album is that, even though the duo has succeeded in the aforementioned coordination of intention and effect, it fails to stand compositionally at the same height, so the emotional background traced by the listener, cannot become completely his own. The main reason for this is that to a large extent the compositional process seems to occur in parallel with a study of the sounds that the two musicians chose to experiment on.

Of course this should not discourage fans of the 70s progressive electronic sound, but probably a wider audience of ambient music. The result is definitely interesting. The two pieces they created may not have brought cosmogony to the art of music, but they stand as examples of authentic musical expression, since despite the German music background, the origin, the environment as well as the connection between the two musicians are evident.

The Swedish duo unfolds its ideas in two 25- and 23-minute epic compositions influenced by bands and composers such as Tangerine Dream, Ash Ra Tempel, Manuel Göttsching and Klaus Schulze.

The title track refers directly to the days of electronic kraut sound inspired by the landscape of Swedish nature and the alternation of forest sounds and light during daytime. Even the sounds of birds and the organic reproduction of natural sounds are used, managing to put the listener in the appropriate mood.

Somnus leans towards ambient music and has a more modern feel. It reminded me of the Norwegian band Biosphere and their ability to convey icy images of the north and the majesty of nature through seemingly monotonous sounds revealed after multiple listens. The classic choral part gives an extra grandeur.

Of all the revivals of progressive genres of previous decades that have taken place in recent years, perhaps the most underrated is electronic music of the ‘70s. Time will tell if the pandemic situation that favors introversion will favor similar explorations.