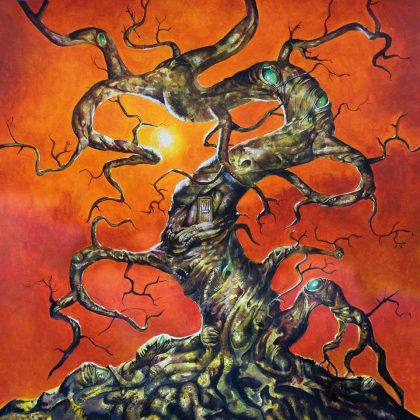 A group that comes from a small town in Finland called Kaustinen, which has this coat of arms and is known only for the folklore festival which is organized there, is expected to have an excellent background. Kairon; IRSE! typically consist of four members (Dmitry Melet: vocals / bass / violin, Johannes Kohal: Drums, Lasse Luhta: Guitars, Niko Lehdontie: guitars / keyboards), but the involvement of Andreas Heino in brass (saxophone, clarinet) is crucial to their music. With their first album dating back to 2011 entitled Defect in that one is bleach / We’re hunting wolverines, it is reasonable not to make their presence felt immediately. The huge potential of the Finns with the odd name emerge on the surface with the remarkable album of 2014 Ujubasajuba, exploring with their own way the partnership of psychedelic with progressive music. They were discovered by Svart Records and now through this we will enjoy their third full length album entitled Ruination.

The constant repetition of rhythms, the ethereal vocals and the post rock aspect of their music as “exotic” features of the prog rock they’re playing, remain in Ruination album and even strengthened against their pure progressive look. With the 25-minute (cut into two parts) Sinister Waters opening the album, Ruination directs the listener towards its most inaccessible parts, showing forth more traditional prog forms, but also by developing in an amazing way their psychedelic side (especially in the last 4- minute of the second part, with the conversation of the space keys and the rhythm section, the album touches the top).

Going past Llullaillaco with the late, indie-post-psych logic, we arrive at Starik. Primal heavy guitars initially, saxophones and avant-prog shortly after, traditional prog towards the end (with vocals reminiscent of Jon Anderson and melodies referring to Yes), the composition includes everything we want by a group like Kairon; IRSE!. With careful movements, they are building a composition guide for the future, which it would take them away from the prefabricated practices of shoegazing and modern light psych. And it is easy to realize that the power of Kairon; IRSE is in the dynamic bursts and escalations, but obviously confused between their influences they are not (yet) able to offer something totally monumental. A typical example of this is Porphyrogennetos that while initially rehashes known psychotropic patterns, it is evolving into a cute folk / acid instrumental little fair, leaving a bittersweet taste. Another case that does not add to the quality of Ruination is the homonymous composition, with the default crescendo The album ends somewhere at this point, although I admit that the melody that surrounds it is an interesting one.

Certainly the overall sign is positive and only the value of the first side is more than enough for someone to appreciate Kairon; IRSE!. While it is a pleasant listening overall, it requires a reassessment of the really worthy features they bear as a group to move to even higher flights, far from the likeable and restrictive space of Kaustinen.

Ruination is the third album by the Finnish Kairon; IRSE! and the production has been edited by Juno Vanhanen (Oranssi Pazuzu). With a background such as the psychedelic and experimental sound, their new album embraces the principles of progressive rock and the big names of the 70s. Many may rush to consider this release as part of the wave of the revival of traditional prog rock. The truth is that this year’s Kairon; IRSE! are influenced by the archetypal moments of the genre but are not entrenched into a barren vintage style. Their music is structured focusing to experimentation and mood for mixing elements like dream pop and shoegaze. The final result sounds innovative, relying both on the intelligent management of the past and on the other hand in the processing of influences with the current trends, ultimately achieving an authentic sound. Ruination constitutes an overwhelming quality release that presents us a highly promising band.