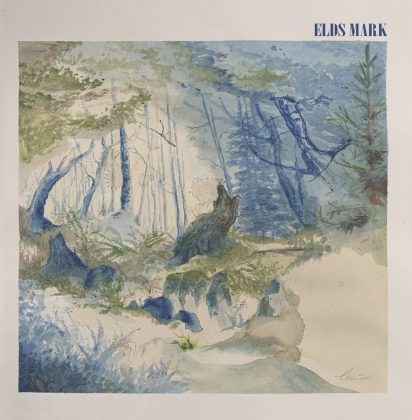 Elds Mark combine two elements that make this presentation very interesting. This is their debut album and very little known about the band, and thus a mystery surrounds this release. After some research, we found out that the Norwegian band is a side project of Håkon Oftung (member of Jordsjø and Tusmørke), who appears here under the pseudonym R.E. Turitrøen and plays acoustic and electric guitar, mellotron, clavinet, piano, and Kristian Valbo (member of Obliteration and Black Magic), who appears as C.E. Berg and plays drums, percussion, mellotron and guitar. The artwork of this mysterious release was drawn by E. Gjerdaas, the mastering was carried out by Jacob Holm Lupo and the music of Elds Mark combines folk and prog in a very special way.

“Best enjoyed with a view to spruce forests and fresh water”

We live and breathe for records that come out of nowhere and revive our interest to music reminiscent of older times, but at the same time manage to sonically harmonize with modern-day music. The debut album of Elds Mark is a collection of eleven instrumental compositions that combine prog and folk in the context of high aesthetics that have characterized the Norwegian scene for the last many years. Long story short, this is an unexpected, top-notch European progressive rock release.

Without mentioning the giants of the 70s who created the sound that bands like Elds Mark adore, let’s place them as equal members of a scene that includes Tusmørke, White Willow, Hexvessel, Espers, Nordagust, Agusa and many other bands that in their own way combine the sounds of Northern European tradition with the rock heritage of Camel, Caravan, Moody Blues, Träd, Gräs & Stenar and Ragnarök. Elds Mark is adding this version to its large family. With members from Jordsjø and Obliteration in their line-up, one would expect them to have more electricity in their music; however they choose to write almost completely acoustic compositions, raising the level of difficulty in maintaining an overall interesting record.

And they achieve it to the fullest extent, because they maintain a uniform low tempo atmosphere throughout the album, without though recycling ideas and melodies. Without crescendos (with the exception of the six-minute Elds Fall), improvisations, complex structures and technical orgasms, Elds Mark present short compositions with flute, guitars or piano as the main axis in a different way each time, relying their logic on the strict preservation of the forest, as an imaginary listening space.

For example, the wonderful song Vår Skog, which is dominated by a dark electric guitar melody, manages to perfectly incorporate thematic melodies played by mellotron, flute and even percussion into its repetitive rhythm within only four minutes. All the compositions are built in the same context, with the instruments strategically alternating in the leading roles, while the rhythm section is placed slightly lower in the mix, constantly maintaining a jazzy approach, mainly offering depth to the sound rather than new emotions. It may be the only weak point of an album that does not include mediocre compositions. If there was more dynamism in the rhythm section or a more ambitious production, perhaps we would be talking about a monumental record, equal to the sacred cows of the 70s. Even so, Elds Mark will be included in the progressive rock lists of this year.

Another new band from our most beloved Norway, whose scene is probably the best in recent years in terms of quality / quantity. Elds Mark from Østfold consist of R.E. Turitrøen and C. E. Berg who, without the help of guest musicians, cover the entire range of string intruments and percussion that enrich their eponymous debut album. Looking at the beautiful cover, one can guess the musical direction the Norwegian duet has chosen. The nordic folk melodies are rendered with an adventurous mood and rich arrangements, thus embracing the progressive folk genre. The main axis in all the 11 instrumental compositions of the album is the combination of the acoustic guitar and the flute with the mellotron sound, as well as with the electric guitar passages that flirt intensely with Scandinavian jazz / fusion. Naturally, the element of northern melancholy is ubiquitous, bringing the impressive debut of the Swedes Ragnarök to mind, but also bands such as Kebnekajse, Landberk and Ciccada. The only weak point is the lack of compositional variety as the whole record has a similar pattern. However, overall this is another high quality debut that will certainly be included in our playlists.