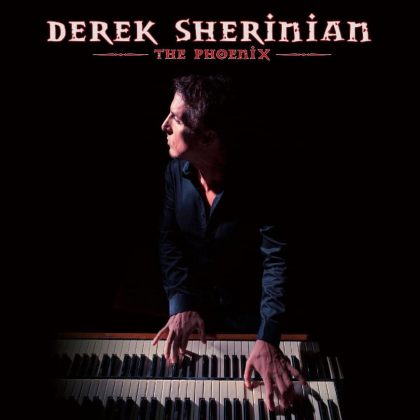 Derek Sherinian’s solo career has been – logically to some extent – overshadowed by the great artist’s participation in Dream Theater and supergroups such as Black Country Communion, Jughead, Planet X, and Platypus. He is also one of the most sought after keyboardists in progressive metal and the wider hard rock / metal field (e.g. Whitesnake, Alice Cooper, Black Label Society, Yngwie Malmsteen, Billy Idol, John Sykes), and has played on over 200 (!) albums.

Sherinian’s solo discography is characterized by an impressive balance between his seven albums to date, among which I’d pick are his debut, Planet X (1999), and his most recent effort, Oceana (2011). This year’s release of The Phoenix with an all star team of participants (e.g. Simon Phillips, Billy Sheehan, Ron “Bumblefoot” Thal, Steve Vai, Joe Bonamassa, Kiko Loureiro) is an exception to the aphorism “all that glitters is not gold”.

The album starts ideally with the fantastic title track, in which Sherinian paints the atmosphere with Van Halen elements and engages in orgiastic phrase exchanges with Billy Sheehan and Zakk Wylde, which could easily be the sound equivalent of a supernova explosion.

Empyrean Sky continues in a similar pattern. At first Rick Wakeman’s giant figure comes to mind, but then the track is transformed into something different, with jazz / fusion elements, with Simon Philips as the unmistakable guide, and the most beautiful groovy improvisation on hammond that one will hear in 2020.

Clouds of Ganymede takes the listener to the giant satellite of Jupiter, in a collaboration with Steve Vai which is also one of the best moments of this magnificent album. Here, the speed drops a bit, Sherinian steps into the shadows where needed, so that Steve Vai’s endless talent shines – one of the greatest musicians on the planet right now btw – who is painting on the music canvas adding ethereal tones. Sherinian follows with a similarly conceived solo, clear proof of his adaptability. In Dragonfly, Sherinian’s ship is left to drift into uncharted waters, resulting in a great composition, with a beautiful jazzy piano theme, and Ernest Tibbs and Simon Phillips adding to the groove from the background.

In Temple of Helios with Bumblefoot and Jimmy Johnson on guitar and bass respectively, Simon Phillips shines with his unimaginable flexibility, where he plays in Toto style, he improvises with a jazz aftertaste, and then leads the progressive rock chariot.

In Them Changes, a cover and tribute to the underrated hero Buddy Miles, Sherinian once again collaborates with Joe Bonamassa. The performance is perfect and funky, Bonamassa is awesome (he also improvises with a wah-wah pedal from outer space), but this could be included in a Black Country Communion album, and does not fit the atmosphere of the album.

The record closes with the wonderful Octupus Pedigree, which highlights Ron Thal’s talent, and Pesadelo, in which Kiko Loureiro goes from flamenco romance to relentless heavy improvisations; the ideal closure for the album.

Anyone who invests in The Phoenix will discover a brilliant album that requires a few more spins to reward richly, and will find moments that curve space-time. He/she will also discover that the album is not just one of the best releases of the year, but also one of the best guitar albums of 2020, in which the talent of each guitarist (and musician in general) “breathes” independently.

If I could find something negative, I’d say that there’s a disadvantage and a doubt. The disadvantage is (as in all of Sherinian’s albums) the lack of consistency. The album sounds like a great best of, like an anthology of exceptional songs that lack the homogenizing breath, the one that will transform it into a musical whole. The doubt may be personal, but while listening to the album I wondered if one would be able to listen to it and surrender to its colors, without relating to the musicians involved (and their own history). Anyway, if you seek pure musicality in these difficult times, this is the right album for you.

A supergroup is one thing and the participation of super musicians in a solo album is another. The first usually has dubious results; the second has clearly to do with the inspiration of the main composer. And in The Phoenix, Sherinian is magnificent. The compositions move between prog rock / metal and fusion, with a strong groove element and in my opinion this is what makes the album enjoyable for someone who is not necessarily a fan of the genre. Apart from that, the production is crystal clear and not too noisy, so no musical information is lost. Besides, what I have always liked about Sherinian compared to most keyboardists is that his compositions are not exclusively based on his instrument, but can stand even without keys. A typical example is Clouds of Ganymede, reminiscent of a track from an 80s guitar hero album, but with a progressive mood, and another one is the cover of Them Changes that could be on a Bonamassa album. Overall, the album is full of very nice compositions (I personally singled out the pompous Temple of Helios, the dark and heavy Octopus Pedigree and the versatile Pesadelo) which could easily become amazing songs if vocals had been added. Sherinian did not release this album just to blow off steam, but to submit his music proposal in modern prog.

The Flower Kings – By Royal Decree