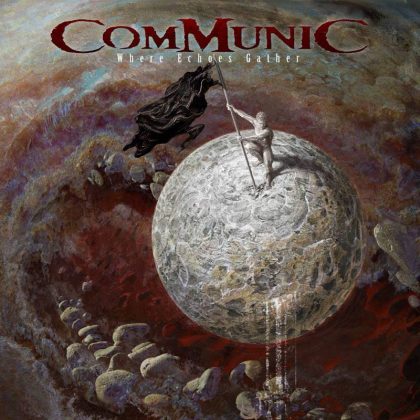 Communic from Kristiansand, Norway are wise in the ways of the metal scene. Their music was based (still is) on Sanctuary, Iced Earth, Metal Church and mainly (and above all) on the first three albums of Nevermore. What they do can be described as heavy prog power expressed through lengthy compositions and remarkable vocals and guitar work. Even though many view them as a carbon copy of Nevermore (a bit far-fetched, but there is some truth in it), they proved on their four previous albums that they are able to deliver very good songs peaking with the quite fresh and inspired Waves of Visual Decay (2006). The two albums that followed up, namely Payments of Existence (2009) and The Bottom Deep (2011), demonstrated a compositional decline. After a string of four albums under the umbrella of Nuclear Blast they were signed by AFM. Six years of absence is a long time and it remains to be seen if it worked in the favour of the Norwegians and their fifth full-length album Where Echoes Gather.

After a six year absence, one of the most popular European modern prog metal groups is finally back with their fifth release Where Echoes Gather. Most of the songs were written during 2012 and 2013 but the birth of Oddleif‘s second son made him decide to take some time off from the band. I became a fan of them shortly after they released their tremendous debut Conspiracy in Mind which is still one of my favorite prog metal releases of this century and I really missed these guys and their unique and imaginative approach to the music I love.

The new album continues the tradition of their previous ones but also offers some fresh ideas especially in songwriting. The mix of progressive with thrash metal is very well done once again by the Communic team. All elements which characterized their work from the beginning are still here: the complex and thrashy riffing, the catchy melodies, the dark atmosphere and the amazing transitions.

The first track, The Magnetic Center, is a great way to start off the album. The riffs are heavy, the leads are intense and it sets the mood for the whole record. Oddleif’s voice sounds very mature, and the vocals are amazing throughout the album. His performance in Moondance is one of the best he has ever done. The emotional delivery at the beginning of the song gives me goosebumps every time I listen to it. All tracks on the record are quality compositions and every song has its own identity. The playing is impeccable, with a powerful crystal clear sound production. The nine songs here are actually only six pieces, of which three were divided into two parts. I admit I’m a huge fan of their long tracks. Definitely it’s a very different release structurally, but not less interesting. They still know how to write emotional and powerful songs at the same time. The instrumental parts are mesmerizing and they show how strong musicians they are. The guitar work and time signatures are both of the highest caliber. The choruses are memorable and very uplifting in some cases. The band still has some Neveromore / Sanctuary influences. This is very evident in the heavy number Black Flag of Hate and the majestic closing track The Claws of the Sea. Communic is one of the few bands nowadays that never had a line-up change and the perfect chemistry between the three members is very obvious on this album.

Where Echoes Gather is undoubtedly their most progressive album to date and it was absolutely worth the wait. In my opinion the old fans will be pleased and the new ones won’t be disappointed. Had they taken their chances to experiment a little bit more and had they fixed some flaws which were also noticeable on their previous effort (not so tight rhythm section or some songs do have nice vocal and melody lines, but never reach any sort of climax – consider Moondance), this work would be their best since Conspiracy in Mind.

It is heartbreaking to conclude that the six years that intervened since the last album of Communic didn’t work in their favour; instead it seems as if they lost their tempo and they are out of form. The songs are mostly mid-tempo, there are only scarce fast outbreaks and the repetitive melodies and the dragging span of the tunes make it hard for the listener to get under the skin of Where Echoes Gather. They draw influences from the mid-era of Iced Earth, Sanctuary and Nevermore of course, yet they demonstrate only a handful of their strengths. Intense riffs and melodies that will grab the listener are absent, the compositions are deprived of any adventurous and unexpected turns but worst of all the voice of Oddleif Stensland which up until now was one of their highlights sounds safe and not at all theatrical as it did in the past. Communic once possessed the potential for becoming a top-shelf prog / power band, but today they sound as an outdated US power metal group that verges on boredom.

Τhe fifth album of Communic out this October

Evergrey – Escape of the Phoenix

Tuesday March 9th, 2021 Νέες Κυκλοφoρίες Comments Off on Evergrey – Escape of the Phoenix