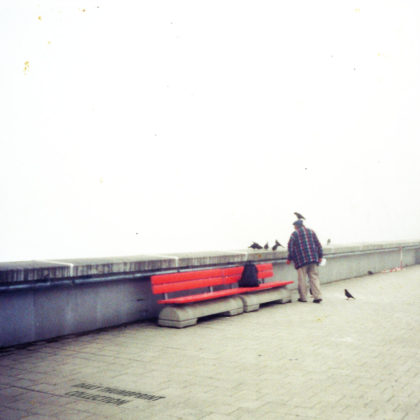 Caleb Dolister, the drummer of Kandinsky Effect, has released the third part of a collection with his own compositions this year, recorded at various places, and the whole process lasted more than 10 years. As a professional session drummer, during all these years Caleb had been travelling to various US studios for the recordings of mainly jazz and classical music records. The respect and appreciation to him is reflected in this record, since more or less 23 different musicians (including Dolister) participate in the album.

The idea of Daily Thumbprint Collection 3: The Wandering was formed in 2008 and the recordings took place between 2009-2014. The result could not be anything less than special (if not unique).

A journey with unexpected destination(s)

With a sound based on jazz, prog and post-rock music, it makes sense for the material to be characterized by high level of technique, but despite its instrumental character, it’s obvious that the creator honestly captures a very specific atmosphere, inspired from a wandering musician’s life on the move. It is this metaphor that creates constant stylistic changes in the 10 compositions on the album. And the question that arises is whether the composer has managed to create a solid album or just put some scattered ideas in order.

The answer is not easy, because Caleb Dolister is not a one-dimensional artist. His post-rock origins remain present and this helps him to create smooth alternations between many different instruments, without losing the atmosphere. The most typical example of this is the opener 080620 [the second place], which escalates like a classic post-rock composition. On the contrary, when he composes with a jazz or classical approach, the result is much more interesting. 090921 [the one that went away] could be part of a very interesting soundtrack, 081227 [the formalist] with saxophones and trumpets brings the most trippy moments of Jaga Jazzist to mind, while the labyrinthine structures in 090510 [the drifter] and the continuous alterations offer the proggiest composition of the album.

Diversity is not what’s missing from Caleb’s music. It’s ideas like those in 081205 [the one that lost their way] where heavy guitars go hand in hand with piano melodies. There are similar post-metal flares elsewhere, as e.g. in 080721 [the machinist], offering depth and color to a rather gray album. However, on the whole these are just few in an album that does not aim to create memories and win you over with its hooks, but rather to offer you a pleasant listening experience, to take you on a journey to the influences and the experiences that the artist had, and finally make you follow its difficult path. Dolister succeeds to a great extent and in whatever places I got lost, a little later I found my way back to the entertainment it offered me.

The Daily Thumbprint Collection 3: The Wandering is one of the most ambitious albums released in 2020 and definitely one of the most special. Dolister’s instrumental work is clearly narrative in nature and perfectly achieves this goal mainly thanks to the impressive, rich orchestration with a multitude of electric and mainly acoustic instruments weaving the compositions. The general style extends from avan-prog to jazz and post-rock with quite a cinematic style, quite close to the style of a unique atmospheric soundtrack, with Dolister’s simple or busy drumming playing a central role with constant rhythm alternations. Unfortunately, not everything is successful. The heavier (borderline metal) parts do not fit convincingly enough with the melodies, and there are parts that sound more complicated than others, probably due to excessive editing. In any case, the album still sounds original and very personal and that’s what’s important. Recommended to all fans of atmospheric instrumental music regardless of genre.