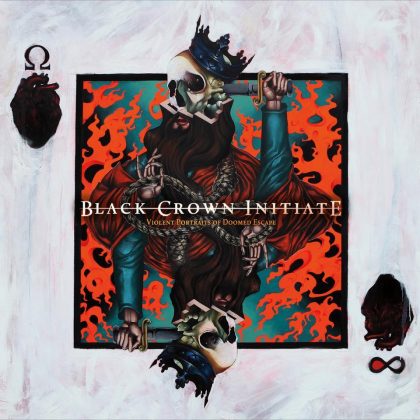 Black Crown Initiate from Pennsylvania, USA, was founded in 2013 by Nick ‘Bass’ Shaw (bass), Andy Thomas (guitars, clean vocals), and James Dorton (brutal vocals). They showed their first credentials with the EP Song of the Crippled Bull (2013), which is considered by many even today as their most impressive work.

Their reputation grew even more when they opened for Behemoth, Fleshgod Apocalypse, and Septic Flesh, among others. In 2014 they decided to release their debut album entitled The Wreckage of Stars on eOne Music having added two musicians to their line-up. After that, Selves We Cannot Forgive (2016) was released.

Contemporary death metal with progressive influences had already begun to be recognized as a new wave, a fact that was capitalized with the band signing to Century Media and the release of this year’s Violent Portraits of Doomed Escape (2020).

How fresh can progressive death metal sound in 2020? The truth is that it can and even rather vigorous. This was taken care of by Black Crown Initiate with Violent Portraits of Doomed Escape, an album that testifies the band’s mood from the album opener, Invitation. Just listen to it and you will be surprised by the changes in style and dynamics. The next question is what do Black Crown Initiate do so well and why one should check this release.

Let’s start with the basics of the genre: this is progressive death metal with clear influences from Opeth, especially Blackwater Park. Component 1: double vocals, clean and brutal, with the noticeable difference that the clean vocals are better than in most other bands, and that they have their own characteristic color, fitting perfectly with the musical content. Component 2: successful atmosphere changes with the great example of Invitation, and the excellent – probably the best song of the album – Holy Silence, a composition that would make Åkerfeldt proud. Component 3: sharp and heavy riffs that construct the album. This is perhaps the strongest point of Black Crown Initiate, those memorable, diverse riffs. The addition of guitarist Ethan McKenna was catalytic. He’s the guitarist that the band needed from the beginning. Their sound is rough in several places, but it successfully flirts with the impending calmness and dualism of their music. I was often surprised by the change of musical course, and the mix that each composition deposits. In addition, the rhythm section is tight, and especially Gabe Seeber’s drumming is masterful.

Note, however, that the sound of the drums itself is dryer than it should be, and the mixing in general is probably a bit “noisy”. Apart from that, Black Crown Initiate wanted to enhance the atmosphere and that’s why they included two compositions as middle and outro. However, the grunts (like those of Mongol monks) in Bellow are rather unnecessary, and the Invitation-related but unnecessary outro deprives Holy Silence of the possibility of being an epic closing of an overall very good record. Finally, although their sound is not the redefinition of the genre, the performance and the aesthetics are the elements that determine their identity.

Although the music is the most important element, the special and enigmatic aesthetics of the album cover completes the album ideally. Lyrically, doubting prudence, the evil that grows in the human soul, the arrogance of power, the mockery of the higher Being, the nullification of existence, and the decay of emotions are the basic themes. Pessimistic choices that dress the music content appropriately. According to the band itself, Violent Portraits of Doomed Escape was composed during a very difficult period for the members, and all these experiences are reflected in the album.

With Violent Portraits of Doomed Escape, Black Crown Initiate make a big statement that they’ve come to stay, and this statement translates into the most remarkable extreme progressive album, and one of the most interesting so far this year. This is an album that makes all those of us who miss the death prog of Opeth happy.

The truth is that I wasn’t aware of Black Crown Initiate, and when I first heard this album, I was not excited at first. They gave me the impression that they are trying to play like Between the Buried and Me, especially in the song Sun of War. Fortunately, things changed soon after that. The Americans have released a grower progressive death metal album, not in the style of Death or Obscura, but more like the technical death metal of Beyond Creation with a progressive element and some clean vocals. The album is very thoroughly worked with an incredible production, technical rhythm parts (but also some more straightforward), incredible riffs, great solos, and awesome vocals (the growls are reminiscent of Opeth and clearly have this “crazy” tone of Mastodon). I found some songs in the middle of the album relatively unequal compared to Invitation, Sun of War, and Holy Silence that open and close the album, but that does not mean that the flow is lost. It’s just that in their longer tracks they unfold their progressive ideas better, and that makes me optimistic about the band’s future. Violent Portraits of Doomed Escape is a wonderful extreme metal release.