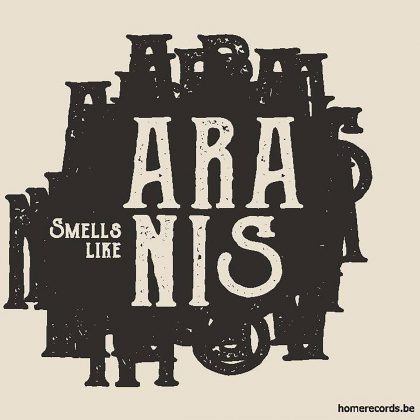 Aranis rank among the most remarkable representatives of RIO / avant-prog nowadays and they have accomplished this step by step, until the masterpiece Made in Belgium II which was the culmination of the long-term experiments of the band from Belgium (our reviews in Greek here).

This year, Aranis are back with something out of the ordinary, which is exactly what one would expect from them. The title of their new album is Smells Like Aranis and it is exactly what you think it is.

Historically, the performance of guitar or electronic music with acoustic instruments (mainly strings and woodwinds) has been a challenge for every artist and listener. The impressive results of this project basically show that in music there are no limits neither in trends nor in orchestrations. Bands such as Apocalyptica (with Metallica), Zapp4 (with Radiohead), and the quartet of Alexander Balanescu (with Kraftwerk) are classics in their transcendental nature.

However, when Aranis are about to cover Nirvana, this alone is great news. Having still fresh in our memory the masterpiece Made in Belgium II that was released three years ago, it did not predispose us that this would be their next move. The talented band from Antwerp had accustomed us to a logical evolution from album to album and now we are pleasantly surprised with Smells Like Aranis. The (in a theoretical basis) musical incompatibility between the Belgians and the famous grunge band is repealed here triumphantly.

Those who happened to grow up in the 90s listening to Nirvana having identified themselves emotionally with them, should not expect an accurate (note to note) transfer in the context of classical music, but clearly a more qualitative approach. Their modern RIO / avant-prog profile is enriched with folk elements, chamber music and the exuberance of rock allows them to reconstruct known hits such as Smells Like Teen Spirit, About a Girl, Heart Shaped Box and tailor them to their character.

The dynamics of the original tracks is maintained and enhanced by improvisations, introductions and variations in an atmosphere of inspired maturity and infallible executive presentation, owning them with an emphatic way. The perfect production with a sound alive and full of energy captures the listener from start to finish. Strings, flute and accordion within a wild carousel of organized and “paranoid” genius transform simple rock forms in masterpieces, in such a way that the uneducated ear finds hard to recognize. Typical examples are Polly, Lithium, About a Girl with their graceful development, to the most broody Been a Son and Something in the Way. From this interesting tribute they could not miss the double tribute to Kobain and Bowie with The Man Who Sold the World. In between at key points Smells Like Aranis 1, 3, 4, 5 reveal in a seductive way a sweet melancholy and an emotional lyricism (a reason to love Aranis). The absence of drums and percussion -bsolutely justified- just shows the complete control and autonomy of the melody in a rhythmic and harmonic level. Once again, they remain intact and purposeful in their musical vision and direction.

Beyond all analysis, Aranis, as musicians who respect themselves and their audience, express their appreciation and give a sonorous answer in the music elite. They provoke and invite prog fans that might have snubbed Nirvana to embrace Smells like Aranis as all their previous works. They have the talent that as a magic wand whatever it touches takes shape, aesthetics and even aroma. A fragrance that we hope to arrive sometime soon to our country.

Like the Belgians themselves declare for their new album, the listener should not expect another series of “cover songs” or a sterile outcome of classical orchestrations. The buzz here is for the new album by Aranis, Smells Like Aranis, consisting of remixes of songs by Nirvana. Without doubt, this is a bold experiment, given the avant / RIO character of Aranis. The result is no doubt a successful one and presents a completely different picture of Nirvana, without complexes and mannerism. Although the Belgians ‘play’ with Nirvana in a continuous process of abstractions from the original material, as indicative moments of the album I would suggest Lithium and The Man Who Sold the World. Anyway, one of the interesting remixes one might hear, that simultaneously brings forward the performer, in this case Aranis. Finally, it is highly recommended (if not necessarily) to every friend of contemporary, “modern” music.