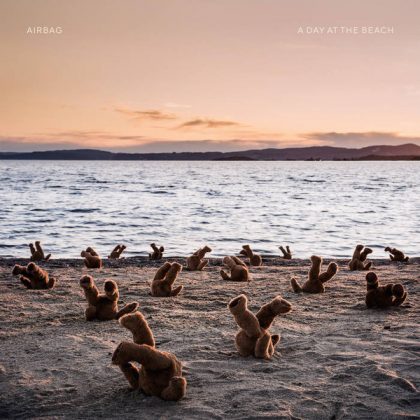 Listening to lots of music over the years, we often come across unexpected productions that pleasantly surprise us. Especially when they combine the sweet nostalgia of the initial contact that developed into passion, then we’ve hit bull’s-eye.

A recent case is that of Airbag from Norway. Their journey began in 2004, between five classmates with similar music tastes and since then they keep our interest with inspired prog rock releases.

The bands that have inspired Airbag since their debut are easily traced. So, one can easily see the narrative mentality of Pink Floyd behind Tostrup’s compositions, while there’s a distant Archive influence here and there.

This year’s A Day at the Βeach, their fifth album, is the collaboration between the remaining three members (Asle Tostrup, Bjørn Riis, Henrik Fossum, Anders Hovdan) after the departure of two of the band’s founding members.

An original mix in a tested recipe

In A Day at the Beach Airbag keep all the elements that made them one of the most important prog bands in their country, while taking the risk to use synthesizers, and attempt a renewal of their sound adopting more elements from electronic music (definitely more than ever before), especially from ’80s bands (specifically new wave). Although it sounds a bit anachronistic as an idea, the result justifies them, pleasantly renewing both genres.

On a lyrical level, Airbag explores the areas of alienation, power, and the influence it exerts on the weak, giving voice to those who see their future being at least uncertain. Thoughts, words, images that seem even more relevant due to this year’s global epidemic.

Machines and Men opens the album and takes us back to 1975, with a direct reference to the masterpiece Welcome to the Μachine. While respecting their roots, Airbag build and expand historic legacy using the same materials.

A Day at the Beach (Part 1) moves at a slower pace, with the first rays of dawn finding us on a beach, thinking about our journey so far. Airbag invest on atmosphere once more in Into the Unknown, with Tostrup wonderfully singing Riis’ lyrics, until the middle of the song which then turns into a nostalgic Gilmour-ish ballad with Riss’ 3-minute guitar solo.

Τhe fourth song, Sunsets, breaks the series of calm songs by raising the speed a bit and opens the second side of the album ideally. This song is equally rock, alternative ballad and atmospheric, one of the best moments of the album.

It’s time for A Day at the Beach (Part 2), which continues from where the first part jhad left off. The atmosphere is built for three minutes then welcoming Riss’ weeping guitar, until it fades out as calmly as it started.

The album closes with Megalomaniac. This ballad brings together all the elements that have made their appearance on the album so far and expresses them through the pulsating bass of the guest Kristian Karl Hultgren (member of Wobbler), the slow but at times ecstatic drumming by Fossum, Riss’ atmospheric  guitar and Torstrup’s expressive vocals.

The ability to be inspired by your daily life, process it, shape it and then deliver such soulful artistic result, is one of the most important processes. The ambiguous concepts in their lyrics are interesting to say the least, having a non-emphatic political character. But what I enjoyed most was the narration of their music.

The albums of Airbag have now become a tradition for all of us who are thirsty for quality doses of Floyd magic. Such doses, which manage to hardly bother the listener at all although they’re quite obvious. Specifically in A Day at the Beach, Airbag have partially renewed their approach. Their gaze on Floyd’s sound always passed through alternative lenses. Bands such as Porcupine Tree and Archive should be mentioned as a compass for those who have not come in contact with the Norwegian band. This time they dare to add new wave sounds from 80s to the mix, achieving the biggest sound update so far in their career. The direct references to new wave blend beautifully with their style, proving that apart from Pink Floyd, they have delved deep into history and the evolutionary course of alternative rock. A Day at the Beach sounds atmospheric and at the same time essential, while it fully justifies its title and can certainly be proposed to a wide range of listeners, as the soundtrack of this summer.