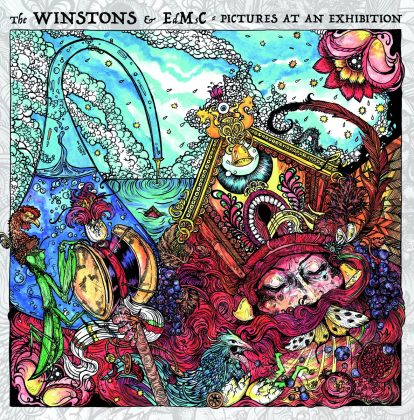 The Winstons are one of those bands that stand as a powerful argument to engage with modern rock music. The trio of Lino Gitto, Roberto Dell’Era and Enrico Gabrielli (with pseudonyms Linnon, Rob and Enro Winston) from Milan amazed us with the excellent self-titled debut in 2016. Their music there was a tribute to the British Canterbury scene with the sound balancing masterfully between prog and psychedelic rock, with minimal use of guitar.

Their second album follows a completely different direction, reminding us of course of the second 1971 ELP album. Only this time the guitar is completely absent.

Trying to perform a ten-piece suite such as Pictures at an Exhibition composed by the great Modest Mussorgsky on prog rock form is certainly a risk, especially when in the rock universe this piece of music has been identified with the legendary Emerson, Lake and Palmer. Apart from the necessary musical knowledge and training, one also needs imagination and high level of musicality in order to achieve this. That’s exactly what The Winstons have.

The trio of Gabrielli, Dell’Era and Gitto shines all over the album, but the one who actually steals the show is the outstanding guest violinist Roberto Izzo who in all the parts that include violin is really exceptional. Roberto De Genarro’s performance on vibraphone is also magnificent, contributing uniquely to both the calm and the fastest points of the album. It would be an injustice, however, to distinguish any single player in this release, as we are talking about a group with the full meaning of the word. It is apparent that he protagonists change constantly. The amazing dynamics and the seminar orchestration are the two main things that stand out. The production and mixing highlight even more the work that has been done here, while the cover art itself attracts everyone to search for the musical content of the album.

I think we are dealing with a really important recording. Apart from the musical performance, the way Pictures at an Exhibition is played here further emphasizes the direct relationship of classical music with both symphonic prog as well as what has been commonly called eclectic prog rock in recent years. The coexistence of violin, vibraphone, keyboards, bass and drums is original and unusual in rock and even jazz-rock music, while the approach of the talented Italians is unique and self-evident compared to the 1971 ELP album (it is obvious that the band does something completely different).