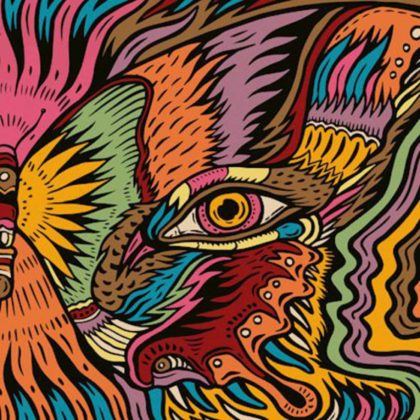 What would you prefer? A double album or two separate releases? If you think about it, the answer is not as easy as it might seem at first. The main reason that this year’s The Shadow by The Tronosonic Experience was released in two separate volumes was probably the fact that the entire material would not fit on one CD. The untimely passing of bassist and founding member Per Harald Ottesen may also have played a role, as these are the quartet’s last recordings with the lineup that hadn’t changed since the first record. The covers of the two releases have the same concept with a variation in colors and spotting any differences is an interesting task. Vol. I had us excited (check our reviews here). What about Vol. II?

The same, in a different way

Listening to Volumes I and II of The Shadow in a row, it’s impossible to tell that these are two separate records. And it makes sense. A band split the sessions that resulted in a set of tracks into two records, right? Right, probably. The fact that this band is purely instrumental makes any differentiation even less likely. Especially when we talk about The Tronosonic Experience who, although Norwegian, although jazz/prog and Norwegian, do not like to indulge in endless experimentation. Their style is tight and dynamic, full of riffs and solos aiming to groove and develop the themes rather than escape from them.

However, it is worth trying is to listen to the two records separately a few times. Even if the original goal was indeed a single release, the separation of the material into the two volumes is not that random.

Vol. II starts off with Undertow (Slight Return), a brief introductory reference to the final track of Vol. I, before The Shadow of the New Praetorian kicks in, which is the closest to a title track of the two albums and at the same time this is the band’s longest track to date and the first over 10 minutes. Here the band departs for the first time from the pattern faithfully followed up to this point. The great heavy riff explodes redeemingly after two minutes of built anticipation. Per Harald Ottesen’s amazing dynamic phrasing and Jan Inge Nilsen’s slick drumming provide the ideal environment for the development of Øyvind Nypan’s guitar solo which is one of the band’s absolute highlights, when rhythm changes lead to the gradual delivery to an almost discordant setting before the final explosion with Ole Jørgen Bardal’s sax leading to the triumphant end.

Supernova is the calm after and perhaps before a new storm, with the background evoking drown situations, before the somewhat enigmatic jazz melody at the end. A masterpiece of simplicity that brings you to the edge of your seat. Beehive‘s opening riff lives up to the prediction and the typical Tronosonic Experience groove restores sonic order, before Bardal and Nypan’s heavy jazz/prog solo which is another brilliant moment.

Chiaroscuro is something of a farewell to the late great Per Harald Ottesen. His bassline is the foundation of the last composition of the record, a gentle ending that acquires a more ambient version in Dunes, with which an enjoyable listen is completed.

In summary, The Shadow Vol. II is a worthy continuation of the first part, with more adventurous parts and the bond of the four musicians being a guarantee for success. If I were forced to compare the two parts, I might prefer Vol. II a bit more. However, The Shadow is a single experience and overall the best The Tronosonic Experience has given us to date.

The intro Undertow (Slight Return) acts as a link between the two volumes. It’s hard enough to write 12+ minutes of instrumental music and manage to keep the same tension every second of the way. The Shadow of the New Praetorian is one such accomplishment. Nightmarish and incredibly technical at the same time, with the saxophone themes sounding heavy and mournful, creating a doom feeling.

Beehive is a classic moment of the band, i.e. extroverted jazz / prog that flows beautifully. Definitely my least favorite on the album, but that doesn’t mean it’s bad. On the contrary. Especially the second half is impressive.

However, Supenova and Chiaroscuro are significantly different since they are soft jazz compositions, mellow and atmospheric, almost hypnotic. Ciaroscuro is an Italian term that describes the sharp contrasts of a painting. The bright and the dark. In this terminology if the first part of The Shadow is the light then the second part is the dark. These two compositions sonically tend towards the classic Norwegian jazz composers.

Objectively the two parts of The Shadow are on roughly the same level. But I believe darkness won out over light in this case, and in the future I will listen to the second volume more.