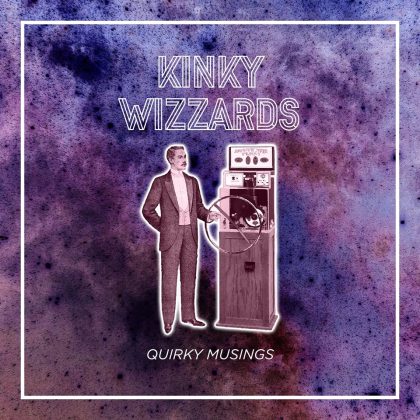 Kinky Wizzards hail from Wales and is a trio consisting of Mathew ‘Miffy’ Griffiths (bass), Jonathan ‘Jiffy’ Griffiths (drums) and Ryan Elliott (guitar) which offers us an unforgettable pyrotechnical kinky display of musical wizardry. In their debut album Tasting Toadstools they flaunted a portion of their dazzling abilities that teamed up with an acute sense of humour and unique performing exuberance. Quirky Musings is even more ambitious, mature and representative of the skills of the three musicians. In their own words, they aim for the expansion of the musical boundaries through the instrumental music they play. Yet impressiveness does not lie in what they say, but how humble they actually are…

Quirky Musings is the second album of Kinky Wizzards who come from Cardiff, Wales and it may be the surprise of the year. The power trio delivers a handbook of how jaw-dropping technical skills are blended harmonically with solid groove. Technique is the means of expression of the vast mosaic where every tessera represents an influence; it is a vehicle for spawning instrumental compositions redolent of liveliness, power and unfading spirit.

From the driving hit Caffeine Overdose which leads off the album to the funky rock vibrations of Stomp Foot Syndrome to the torrential prog rock of The Snake with the redemptive change at the second half to Chocolate Teapot with the killer wah-wah drenched improvisation, everything suggests we have to do with something impressive, to say the least. From the labyrinthine A Poltergeist in Glenmore which nevertheless never drops along the way its rhythm to the inspired jazz-rock / fusion touches of Kinky Joe from Mexico’s Burritos to (the summit of the album, in my opinion) Door Dancing Penny Collector that is loaded with swing inclinations and also features the emphatic guest appearance of Terry Quinney on tenor saxophone, Quirky Musings overflows with musicality and liveliness and encompasses in the most natural way the wide spectrum of its musical references.

The tightness of the rhythm section is reinforced by blood bonds (Jonathan ‘Jiffy’ Griffiths on the drums and Matthew ‘Mify’ Griffiths on the bass are brothers) while Elliot’s guitar now adds tension to the rhythmic mayhem now climaxes the compositions with scorching solos, but the basis remains intact throughout: rock.

No matter if the band experiments with fusion and jazz harmonies or if it opts for a more sophisticated prog rock balancing act, it grooves so naturally like never before in this genre. The bizarre song titles (here, the perennial figure of Frank Zappa hovers vaguely) are not only one more lead of their playful disposition, but also they add something to the procedure by imbuing soul and drive to the, one way or another, well-played and well-crafted final outcome. The musical perception of Rush, the energy that the Aristocrats put on the table of their fusion compositions or even Primus who have left their mark here and generally the enumeration of their possible influences is pointless here.

Kinky Wizzards made effortlessly and naturally an inspired and flawless in its entirety album and they pulled off something that only a handful of artists have also achieved in the progressive and, generally, experimental field (despite their credentials): to sound as a band; a great one, no less.

After diligent woodshedding, two brothers from Wales roped in their homie Ryan Elliott (guitarist and singer in the progressive rock band of Eden Shadow, an extremely interesting group!) to round out The Kinky Wizzards. The upshot? Thrilling progressive jazz-rock, entirely instrumental for you. I get the impression that the young band members dedicated initially their time listening to everything that came out under the name of Dream Theater, Rush and Mahavishnu Orchestra and their songwriting was influenced by the technical parts of the aforementioned bands, as well as the jazz-rock ones of Frank Zappa. The musicians compete in technique and essence and the winner, if it matters, is the bass which brings to mind players of the caliber of Billy Sheehan. The album is mainly mid-tempo and the listening is enjoyable in the best sense of the term since the album has an uplifting vibe. I foresee a bright future ahead, if not for the band as a whole then at least for each member individually.