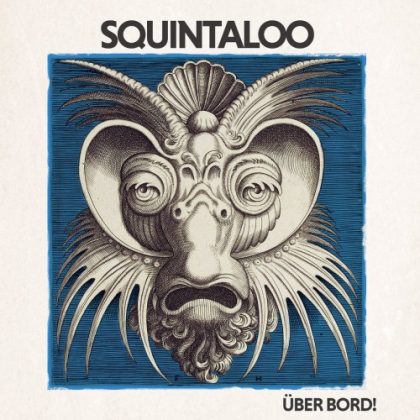 The course of the quartet from Berlin is not run-of-the-mill. Since their debut Latantriga, Latantriga! in 1998, they got back in the day in 2004 with the self-titled album, then Sibirskoblast came out in 2009 and they got back in the saddle once again this year with Über Bord!. Their style, in their own words, is a mixture of 70s psychedelic prog with the addition of modern trends of sludge and art-rock, just like throwing into the mince machine King Crimson, Mastodon, Mr. Bungle, Zappa and Queens of the Stone Age and getting filet mignon à la Squintaloo (!). Now, next to the founding members of Heinrich Schiffers (guitar, saxophone), Daniel Eichholz (drums, percussion) and Klemens Klarhorst (bass) there is Enrico Antico (electric and acoustic guitar) and the keyboards are out of the picture.

Perhaps one of the hardest tasks when it comes to an album review, or merely listening to it for that matter, is when you are confronted by a multitude of sounds and performances. I think this is the case with the fourth album of the Germans Squintaloo which is entitled Über Bord!.

To avoid any misunderstandings, the aforementioned “hard task” is not just a matter of the subjectiveness of the reviewer, but rather it origins from the opus itself which, in this case, comes from the art-rockers from Berlin. Let me elaborate: Über Bord! is an album that demands repeated listens not only because of its duration (over an hour), but also because of the miscellaneous musical elements involved. It is a painstaking effort to come up with a rough title that describes the style of Squintaloo, since they are avowed restless musicians in a constant flirt not only with the “traditional” 70s, but also with the more modern sounds of the 90s (a first taste of the latter comes into picture on Kara Buran).

Without any doubt, this mixture is way more than fruitful for an awful lot of bands. Specifically on Über Bord!, it is impossible not to notice the amazing effort that has been put to maintain a balance (the title-track that verges on the metal vicinity coexists with the electronic 3 Κraken). Then, the technical skills become more than obvious, a fact that has been grasped by the audience of Berlin for starters and the entire Germany as a whole. As regards the latter, it is no exaggeration to say that the progressive version of rock (see Peg Leg Copperjaws) is utilized to a great extent, but most of the bands fail to do it wisely.

On the other hand, the parade of the above can be a springboard for a critical angle. For instance, no matter how the starter Animal Privateer grabs you by the throat with its amazing flow and structure, with changes and tension galore, as we said before the album as a whole demands multiple listens. Perhaps shorter song durations would work a treat (only two of them are around the three-minute mark, while all others last more than seven minutes), whereas the inundation of so many elements overwhelms the listener. Therefore, the album needs more time to grow which will lead to safer conclusions.

The Berliners Squintaloo invite us on board on a journey with their fourth album entitled Über Bord! as the captain. It goes by itself that the album requires the utter attention of the listener. Within an hour of instrumental music, Squintaloo pull off to build a sensation of a piratical adventure. Their arsenal contains prog and jazz sounds that are clearly influenced by Frank Zappa, Yes, Rush and these sounds were the raw material for the German to concoct an album that features not a few parts that catch the listener by surprise and keep their interest. The stylistic pluralism available to Über Bord! may wear the listener out and thwart the flaw of the album. Nevertheless, there are call-backs to the piratical themes, as well as an astonishing musicality that repay the listener. Songs like Animal Privateer, Nigeraurak’s Dream and 3 Kraken are indicative what the album is all about.