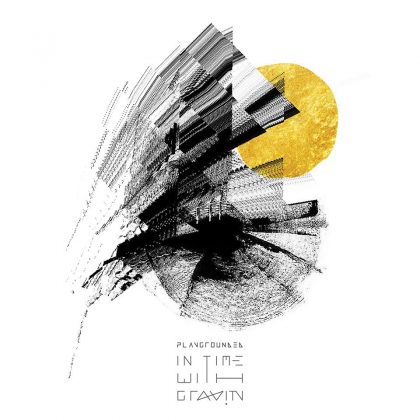 Playgrounded are striking back five years after Athens, their 2012 debut and boy have things changed. In Time with Gravity finds them with a new drummer but more importantly, the band is now based in Rotterdam, a transition that has probably influenced the new album’s direction. So, say you are about to drastically change life in search for a fresh perspective, to escape, or just for the adventure of it. What do you do? If anything, you’re packing to travel light, you’re getting rid of what’s unnecessary, superfluous, redundant…

The gravitas of a deep transition

In Time with Gravity somehow resumes where Athens left off in an almost metaphysical fashion. The band left the confused Athens amidst a crippling all-inclusive crisis to relocate to the considerably more structured, austere and unrelenting, corporate and industrial landscapes of the yet-vibrant Rotterdam. A courageous move if you ask me, one that doesn’t fail to show that the lads are operating as a unit. Accordingly, the new album is made to travel light, as it is stripped of whatever was excessive with the previous effort and attempts to reflect the current environment.

Emphasis is now laid on building atmosphere and Playgrounded excel at that. Samples and loops are assuming a more dominant role than before (I would like more sonic diversity and a take-no-prisoners attitude here) and in order for it to take effect, the riffs and the harmonic rhythm have been simplified to the absolute essentials. It’s minimalistic, almost static and the execution is calculated with industrial precision by a well-tuned ensemble. There were times I caught my thoughts droning to the album; it indeed tends to have an ambient-like quality that seemingly works better in the background.

However, I would expect scrupulous attention to the melodic lines, as the trap with minimalism is that you somehow have to trigger the audience’s attention: when the floor is static, it can be hard to create something engaging while it affects the composition in general. With the exception of Rotterdam (quite the ringworm, at least for me) and a few moments more, I find the vocal lines be somewhat generic, devoid of the unexpected and sometimes I could use them in absence. I am implying of course that a talented bunch as such could take more creative risks while maintaining their philosophy.

It is obvious that the band have put much effort into this and the transitions have worked out nicely. I think the new drummer fits better here, the loops are showcasing a sharper edge the band builds upon and I do not dare to imagine how they sound live – awesome at the very least. Stylistically they have diverted a bit from the Karnivool / Tool / PoS aesthetics of the previous album to incorporate a more Kevin Moore-goes-shoegaze point of view. I also enjoyed the (a tad Blut aus Nord – 777 trilogy) guitar approach. I wish they gig extensively for the promotion of the album, keep working hard to establish their own unique voice and that it won’t take them four years for the next one.

Αfter the release of their EP Athens, Playgrounded decided to move to Rotterdam. A stop in Norway and at the studio with Christer Andre Cederberg resulted in the second album of the band titled In Time with Gravity. The music here continues to blend sounds of progressive rock bands such as Riverside and Porcupine Tree with several electronic music components. In about one hour of music, Playgrounded create a dark atmosphere with many levels of dynamics. Crossing, the song that opens the record, shows the band’s intentions for a rather restrained record without any self-indulgence. Keyboards and samples weave a very nice base for most pieces. The rhythm section builds on the atmosphere of the keys, while Stavros Marconis’ vocals are very nice and create a dark atmosphere. There are a few points on the record that attract attention like the heavy Mute, and the The Stranger – Pt.3 Verdict, but some tracks seem to last a bit longer than they should (The Stranger – Pt.1 Funeral, In Time with Gravity) which costs the coherence of the album.

Playgrounded: from Athens to Rotterdam and Norway for their second album

The second album of Playgrounded out this October