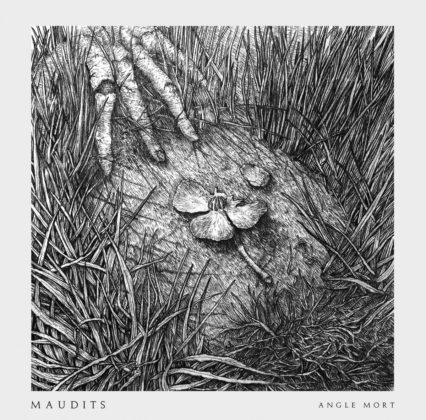 A year ago, when we reviewed the self-titled full-length debut of Maudits, we were overjoyed because we all had the common view that the band’s music is something special, a peculiar mix of ingredients that in themselves have not excited in recent years. Post-rock and post-metal seem to be trapped in predictability, in the non-deviation from the slow-building recipe until the expected explosions, and in the over-investment in ambiance that often leads to no compositional depth. Maudits rely heavily on these two music genres but have a clear progressive inclination and an artistic vision that automatically frees them from these dead ends. This great achievement, which of course is based on the band’s great musicianship, is confirmed once again in this year’s EP entitled Angle Mort.

Maudits are here to stay

The French instrumental collective Maudits released this EP just a few months after their very good debut album. The band offers two completely new tracks and three reworked versions of old songs. From the first tones of Angle Mort it’s pretty clear that band continues in the same direction that was very successful on the previous release. Without any doubt, this EP is powerful and highly enjoyable. There’s no vocals, which works to this album’s advantage. This band is trying to control the imagery and mood of the music and it does that very well.

The dynamics on the album is awesome, as at times the music is delicate, then suddenly very heavy and then fragile again. The album delivers some pretty impressive climaxes and guitar moments but most of all it has some really gorgeous melodies. Evidently, the guys wanted to create an album that really focused on positivity, combining the different influences to paint soundscapes and send the listener on a journey to a different reality.

The string arrangements are just superb. The hypnotic flow of cello sound is one of the things Ι like the most on this EP. The passages and links that connect different melodies to each other are stunning. The drum work is excellent and the ever changing guitar lines which relentlessly shift between heavy and atmospheric sections are quite remarkable too. The way they mix post-rock with metal and ambient electronica, the energy, the harmonies, the execution, it’s all top notch here.

The highlights on the album are Verdoemd and Epäselvä. Verdoemd starts slowly, then a cello kicks in creating a wonderful mood while the tension rises. After a short break and a spoken part, the climax reaches its peak. Epäselvä is a little bit different from the rest of the album, the band successfully experiments with some trip hop and electronica in the first part ,while the second part has that classic Maudits post-rock sound with great guitar and drum work, but then suddenly the tempo changes once again, and we have a beautiful acoustic outro. A couple of times during listening to these two tunes I caught myself thinking how this intro, outro or small part can be so otherworldly beautiful.

I highly recommend this work to everyone who loves progressive and instrumental music. With such songwriting skills, vision and creativity, Maudits will hopefully stay in the game for a long time, and take their time in making new music in the years to come.

Without wasting time after their great debut album last year, the French released this EP. The introductory Angle Mort is a beautiful small composition, with its rhythm reminiscent of a waltz of bliss. In the post-rock / metal doom style that the group plays there is always the trap of narcissistic nothingness, with rhythms that continue in perpetuity but without any substance. The French are not consumed in sisyphean vanity but in essential melodies. That’s what you’ll hear in Verdoemd with the small narration fitting perfectly with its atmosphere and Perdu d’avance which sounds like trip hop played with electric instruments, before being delivered to the electric guitar solos.

It must be said that the band sounds significantly less heavy than their first work, as evidenced in the version of Résilience, now stripped of the intensity of the original. Epäselvä starts with an ambient mood, which is so in line with their style and evolves imposingly with the outbreak of a refined black metal riff.

The end, however, will find me with a feeling that something is missing but the answer is not obvious. Maybe it’s that their music is less adventurous, but by no means can I complain when the result is so beautiful and the level of musicianship is really impressive.