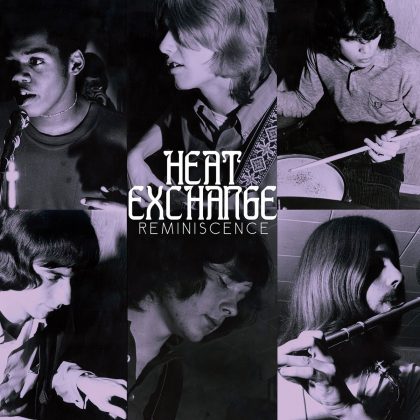 The work of Catalan Guerssen Records is worth praising. They specialize in the promotion of obscure material not only rare and remarkable, but appropriate to further enrich the kaleidoscopic tour of the pioneers of the 70s. The effort of Guerssen Records started in 1996 with their task running out just in the emergence of 70s short-lived bands against the oblivion of time. In essence, bands with psychedelic sound, folk with progressive developments, jazz passages and sometimes guitar. In short, the fullness of time arrived for the Canadians Heat Exchange in order to be made known to wide audiences and especially to the community of those amiably disposed towards the seventies.

The history of Heat Exchange starts somewhere in the late 60s in Toronto, Canada. The band emerged from a band named Cloud which involved four of the total of six of Heat Exchange members, except the saxophonist / flutist Craig Carmody and the lead singer Mike Langford. The unsuccessful attempts to release their debut album in 1972 in connection with the indifference of the record companies, led them inevitably to their break-up. However, they managed to deliver a concise legacy of three 45 rpm records,  the six compositions of which are included in this album, along with some unreleased songs. Some of the band members kept the recorded material and Guerssen Records willing to carry out her purpose once again, gathered their material and presents an addictive compositions package where a blending of heavy prog, prog folk, pop glimpses, jazz and rock guitar is harmoniously achieved.

What seems clear is that their place of origin is not indicative of their influences. The whole aesthetics of the album refers to bands of the Old Albion and the generalized wave of prog rock of that era. If we want to clarify the effects that arise, these will probably be found in two of the favorite bands of Carmody, Emerson, Lake and Palmer and King Crimson, the Raw Material, Jethro Tull, The Nice, Web, and Argent. The album has an exciting flow capturing a band composed of highly talented musicians. To avoid prolixity in relation to the individual development of the album, I wish to stand on tracks which fascinated me most and to the minimum disadvantages I received as a listener.

First, it is the opening For Those Who Listen, a four-minute prog folk anthem based on the keyboards of Gord McKinnon. Imagine a mixing of Argent, Jethro Tull and Procol Harum with the discreet but very successful presence of the flute of Carmody. In the surprising title track Reminiscence, whose characteristic introduction recollects late 60s-early 70s keyboard-driven prog bands, until the Carmody flute takes charge of the composition to take off completely the composition. In the also excellent jazzy Stopwatch but mainly in the last track of the album, the prog / folk epic Four to Open the Door. From there onwards, Can you Tell Me is constructed on a pop base brightened with distinct funk blends, while the highly remarkable Scat effortlessly evokes N.S.U. by Cream. The heavy prog Inferno convinces equally with the foregoing, as well as the switch of harmonica and saxophone in the very good She Made All Alone. The intelligible Philosophy and Scorpio Lady without touching the heights of the previous compositions do not affect the positive sign of the total.

For several years we share a seamless revival of the past, with the positive and negative aspects. Bands like Heat Exchange underline the purpose of this revival which is not ephemeral and any trendy trivialization, but the need to update the past through the present. Reminiscence is a serious reminder of this revival. Rush fearlessly and listen.

It would not be an overstatement to say that this album is a lost gem which if it were released in the  early 70s, it would definitely have at least the same glamour of other exceptional Canadian albums of that era, e.g. Amish, Ellison and A Foot In Coldwater. Focusing on aggressive guitar riffs, the absolutely precise rhythm section and the passionate vocals, Heat Exchange offer 10 tight and diverse tracks that verify the introduction of this review. The touches of the saxophone and the flute give lyricism to the heavy prog potential of For Those Who Listen and Reminiscence in contrast to the quite hard rock Inferno and Philosophy, while the transition to the impregnated with blues / funk / jazz elements of Can You Tell Me, She Made Me Alone, Scorpio Lady and Scat does not surprise at all. Finally, the almost ten-minute epic Four To Open The Door unites all the above and ideally closes a magnificent album.