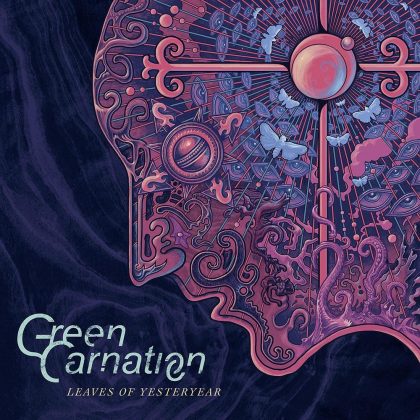 The history of Green Carnation from Kristiansand, Norway had until recently an undeserved ending, which fortunately proved to be temporary. The progressive metal band with gothic and doom metal elements in the first two albums, switched towards a more rock style in A Blessing in Disguise (2003). After two more studio albums and after the release of the DVD A Night Under the Dam, Green Carnation disbanded due to financial reasons and motivation loss. Hence, The Rise and Fall of Mankind, which had already been announced as their next studio album, was not released.

Green Carnation reunited in 2014 and six years later, the release of Leaves of Yesteryear is a fact. We wish Tchort and his companions have come to stay for many more years.

Definitely worth the 14-year wait

After nearly 14 years, the Norwegian band presents a new album entitled Leaves of Yesteryear with duration of 40 minutes and very peculiar characteristics. It consists of only five songs, of which My Dark Reflections of Life and Death is a re-recording of the previously presented theme on the band’s debut album Journey to the End of Night, and Solitude, a cover version of the Black Sabbath ballad. The title track, which was a promo single followed by in a video clip with the magnificent animation work by Costin Chioreanu, Sentinels and Hounds are essentially the only unpublished ones that Green Carnation is offering since 2006, when the previous record, The Acoustic Verses, was released.

Green Carnation always seems to find ways to keep reinventing their sound from album to album without ever trying to recreate or improve upon their previous work. Their root style of doom / gothic metal is still somewhat present in their work, but now they just rock out a lot more and go for a more conventional progressive metal style. Usually, bands that make a comeback after long time tend to do what they are known for, but Green Carnation did not follow this formula and crafted a unique blend. It sounds fresh and new, yet it still is what you could expect from the band.

The melodic Floydian title track is an excellent opener, in which the vocal lines, keyboard playing (which is reminiscent of the early Marillion) and the harmonious guitar playing come together beautifully. It is a very dynamic progressive track. Sentinel starts a bit doomy and continues with a heavy melodic rhythm which leads to a pure explosion of joy in its very memorable chorus. Hounds shows a completely different side of the Norwegians. This strong composition has elements of bluesy classic rock in it. The band did a great job on the cover of Solitude, as it really captures the bleak hopelessness of the original song. An unexpected, but extremely welcome piece and a very fitting final song for the album. The production on this album is clear, giving a good sound to everything that you can hear. The somehow artificial sound of the snare drum will probably cause mixed reactions, but the other elements come into their own much better, both in the atmospheric passages and in the heavier sections. It’s just wonderful how the different contributions complement each other in harmony.

Leaves of Yesteryear was definitely worth the wait. It is a beautiful sonic experience and a successful comeback of the Scandinavian masters. I hope they will continue to follow this path in the future.

The fourteen years since the last release of Green Carnation have not been able to wipe them off the memory of their small but dedicated audience. Besides, the band had taken care of that with the five excellent albums it had offered us until 2006.

The album begins with the melodic guitar-filled title track, with Kjetil’s expressive vocals, wonderful keys and of course the always great lyrics that were never a supplementary addition in Green Carnation music. The oriental doom rhythm in Sentinels introduces new elements to the band’s sound, followed by a re-recording of My Dark Reflection of Life and Death from their first album. They manage to turn it into a dramatic theatrical prog metal composition, but I have to say that I personally prefer the dark doom initial recording. Hounds confirms Green Carnation’s ability to write technical and yet memorable songs, even if they last ten minutes. For the end there is a cover of Solitude (Black Sabbath). The band replaced the flute with keys and with absolute respect for the original composition gave us a small moment of magic.