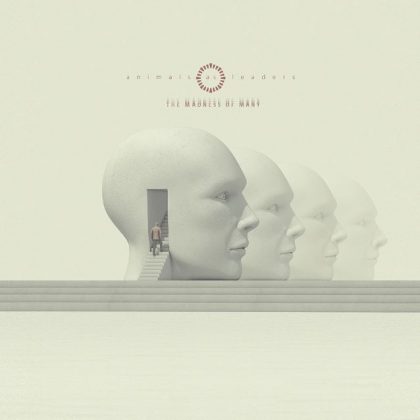 Two years after The Joy of Motion (our reviews in Greek here), the trio from Washington comes back with its fourth album and the second in a row from Sumerian Records. What Tosin Abasi, Javier Reyes and Matt Garstka have achieved is enjoying commercial success by delivering their overly virtuosic prog metal / djent / fusion stuff, which has a vivid academic feeling. The Madness οf Many is here to consolidate the band’s class and its place in modern prog metal.

In Madness They Dwell

Animals as Leaders is since 2009 one of the most important bands of the extreme prog sound, while they have taken the term “superb laying” to a new plateau. This is a good reason alone why each and every release of them is defined by incomparable aesthetics and a lot of hype.

This year’s The Madness οf Many verifies emphatically all of the above, adding a building block to the band’s history. In this album, it seems that Animal as Leaders leave behind to some extend the so-called djent and walk over acoustic fusion paths, while their sound is as extreme as ever and at the same time the production is more “conservative” to serve this purpose.

In an attempt to outline the record’s blueprint (leaving aside cliché-ridden phrases like “rambling experimentations” and “chaotic playing”) we could say that, with regard to aesthetic and style, it is somewhere in between Al Di Meola and Greg Howe, allowing a positive aftertaste to linger, leaving no other choice to the listener than press the repeat button several times. The inclination to leave the triteness of djent behind is among the positive aspects of The Madness Of Many. Cognitive Contortions and The Brain Dance are two out of the ten compositions that stand head and shoulders over the rest, the first one due to its electronic style and the second one because of its acoustic one. The rest are a pleasant listen but not something special.

The band of Abasi, Javier Reyes and Matthew Garstka achieves with this work to justify the group’s fame since its birth. The way Animals as Leaders have evolved the sound and the music in general is an astounding feature in its own right. Those who take delight in demanding listens will get their thrill for sure, till the next record comes out, hoping for even better compositions. Or maybe not. We shall see.

Two years since the very good Joy of Motion, Animals as Leaders present their new work and it is quite obvious what the listener is about to experience, since the band has set up a genre of its own, this mixture of metal-jazz / fusion with modern heavy guitars. But the question lies in what different or fresh could Tosin Abasi’s gang put forward; and the answer is, not much, but the band’s basic elements are honed to perfection, there are well-structured melodies and the record has an identity and includes no fillers. A good dose of slapping from Abasi, outstanding drumming from Garstka, solos that take guitar playing to the next level and well-placed samples so that the listen as a whole doesn’t sound repetitive. Personal favourites: The Glass Bridge και Inner Assassins but there are no songs that fall short, something that renders The Madness of Many a genuine quality record.

Tigran Hamasyan – The Call Within

Saturday September 12th, 2020 Νέες Κυκλοφoρίες Comments Off on Tigran Hamasyan – The Call Within

Between the Buried and Me – Automata I