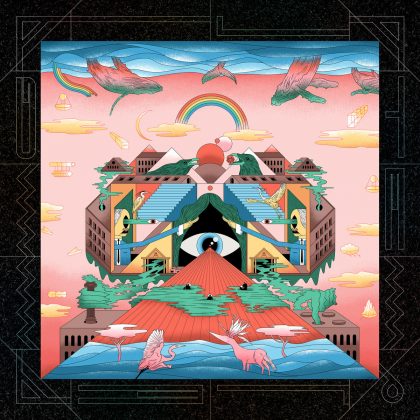 The modern Norwegian prog scene is the boldest and most interesting in the world right now, imo. In the big list of new impressive bands from this scene, one more is now added, and it seems that they’ll concern us in the futre.

Amgala Temple is a trio formed by experienced and talented musicians. Guitarist Amund Maarud is a former member of the alternative rockers The Grand and he also has released three solo albums. Multi-organist Lars Horntveth is a member of the great Jaga Jazzist and The National Bank, and also has made two very interesting solo albums. The third member is none other than Gard Nilssen, drummer of Puma and the outstanding Bushman’s Revenge.

The experience of the three musicians with various musical genres, such as jazz-rock, prog, blues, pop, alt-rock, modern classical, and so on raises reasonable questions: what is Amgala Temple playing and how good is Invisible Airships?

No matter how well prepared someone can be by being aware of the background, the past and present of the three musicians, listening to the debut of Amgala Temple causes a mixture of surprise and impressiveness, which is consolidated into an absolutely positive mark. Invisible Airships may bear some similarities to the bands of the three members (mostly Bushman’s Revenge), but nevertheless it is something new and unique. The different element of the Oslo trio lies mainly in the way in which their music emerged as an intention and therefore in the emotions it radiates. The three musicians based their partnership on improvisation and experimentation, and so they did not tamper their play to preserve the element of spontaneity. Perhaps it is no coincidence that they recorded everything within a few days.

Though the music of Amgala Temple is basically a mix of jazz-rock and progressive rock, it is not that simple. Here, the structure follows the mood of the three members, who are all on the same page aesthetically. Maarud, as a guitarist, is the one who sets off the riffs and the atmospheric solos while rhythmically grooving with impressive comfort at a very high level. The most important thing is that he achieves all that without overshadowing the other two, and manages to impress with his explosive play that marries the three major worlds (jazz, rock, blues) in an amazing way. It is pure delight that his guitar playing has been joined by Nilssen’s drumming, one of the most energetic, intensive and inspired drummers in the wide jazz-rock scene today, who seems to enjoy the broad thematic range and the free band character, being once again impeccable, spectacular and to the point. The contribution of Horntveth is also invaluable with his fantastic 70s bass lines and his genius play on the keys, one of the highlights of the band’s music.

This partnership led to a result very much alive, fresh, dynamic, flowing, but also dark, untamed, mysterious, heavy, psychedelic, endoscopic. It is an ideal instrumental setting to combine the music of the past with that of the present. The different role of each track makes it very difficult to distinguish one or more songs of such a solid album. The two longest tracks at the beginning (Bosphorus) and the end (Moon Palace) of the album are probably the most obvious choices, but it is certain that all the other three tracks of the record have their own magic. This is instantly perceived when someone gives in and lets the album play repeatedly, discovering new unexplored corners upon each consecutive hearing. I don’t know how the band would perform in a somewhat stricter compositional context or how smoother their sound would be if the saxophone and clarinet by Horntveth were included, but that is something that we might enjoy in the future, because Amgala Temple are here to stay.