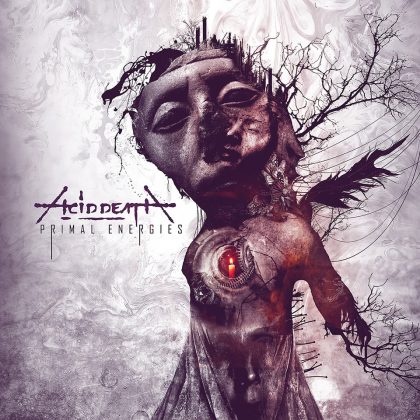 Acid Death is an iconic group in the annals of the Greek metal scene. Their career commenced at the end of the 1980s and they are in business up to this day excluding a long hiatus. Primal Energies that came out this year is their third release since their reunion and harbours ambitions to become their crowning achievement.

Their importance is not measured by simply counting the years they are around, but mostly by the quality of the albums they put out in the 90s when Greek metal was struggling against hardships and they managed to leave their imprint on the technical, and progressive in a wider sense, metal. Their come-back aims to expand the tradition they creeated and at the same time to adapt their sound in the frame of our times.

Exemplary modernization with no discounts

Primal Energies pulls off to strike a happy medium between the standards of the past and the necessity to keep things fresh. From the starter My Bloody Queen onwards, the wind of renewal is palpable. The ethereal female voice bids us welcome to the new universe the band has set up: heavy metal permeated by an imperceptible melodiousness, technical but not remotely pretentious. The addition of the saxophone halfway in the song indicates the band’s desire to try new things.

Reality and Fear is one more verification where the traditional hammered dulcimer and the metal provided by the band are mixed in a sensible fashion; because it is not simply the choice of a prototype, for the heavy standards, instrument that renders successful the experiment, but how it is integrated in a totally different environment and the mastery it takes so that it won’t sound out of place.

Vintage influences are still in force in Primal Energies. The difference compared to their back catalogue lies in the fact that the final result sounds modern, more aligned to the contemporary trends. This does not mean that the spirit of Acid Death is warped – not by a long chalk; instead it is enriched to prove that it has not remained unaltered and indifferent to the progression the scene has made.

It’s remarkable that their faith in the progressive sound does not set the framework where specific rules should be adhered to. The tunes sound free of conventions inherent in the genre and the progressive element wells up naturally from within. Songs like Godless Shrines (with obvious shades of Coroner), the title-track and not only are heavy with well-crafted guitars, impeccable drumming and technical not for the sake of it, but because this is what the compositions call for.

The new album of Acid Death could be the greatest step they ever dared to take throughout their entire career. If we take into account that the years under their belt do not make them hesitant about changes but bold and open to them, the final results honours them all the more. In an inundation of new releases, Primal Energies pulls off to stand out without the slightest nod to the band’s past.

Acid Death return after four years with an interesting intersection between progressive / tech-death and groovier melodeath that definitely notifies the band’s relentless evolution in the metal era.

The sound of the band (and the band) is more mature than ever with fresh ideas that aggressively performed and accurately presented. Tommy Vetterli (Coroner) along with Martin Zeller and the band are responsible for the production and a cover artwork curated by Giannis Nakos (Remedy Art Design) complete a solid professional work.

Primal Energies is fast, continuously intense, cohesive and memorable with dominant vocals and guitars, impressive riff diversity, engaging drumming, with substantial additional sounds surrounding it as well. The female samples and male clean vocals, keyboards, zither sound effects and saxophone solo create all these progressive tendencies that are consistently aligned with the death metal, offering a work that makes the band sounds creative, accessible and prominent pushing their skills to the limit and proving with fiery aggression that they are still here.

Acid Death: “Music is definitely was keeps us going. It is Α and Ω.”