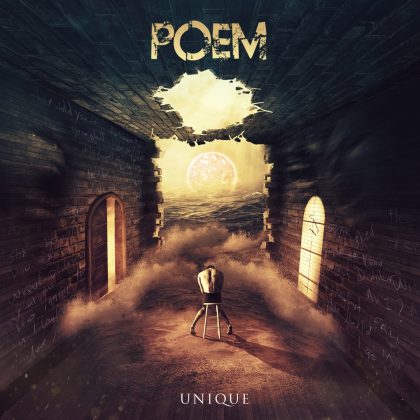 We had waited for seven long years for Poem’s second album, the successor of The Great Secret Show (one of the best prog debuts by a Greek band in my opinion), but Skein Syndrome proved that was worth our patience. After that the absolutely successful long tour to promote the album was at least encouraging for the future.

It is quite easy for all those who have listened to the music of Poem to acknowledge that the band has an international caliber and is “doomed” to climb high. Unique came much quicker than Skein Syndrome, as a reward for the previous long waiting, filling us with joy and impatience for multiple hearings that we eventually enjoyed, confirming our initial certainty once again.

I remember the years when I, as a youngster, was filled with great enthusiasm to find new bands from the Greek scene to support as a Greek metalhead that I was. Thus in 2006, when I was just 17, Poem started out as a band and back then we were amazed by how good they were, but we always add “for a Greek band”. Twelve years later, Poem continue to keep our interest, but now, in conjunction with the other bands on the stage, we are pleased to say that quality is now in excess.

Unique is the third album of the band that comes after a change in the line-up, but mainly after two successful tours with Amorphis and Persfone. The quality of the compositions is once more high, while their style remains relatively the same, which may seem positive or negative for some.

The opener False Morality shows the mood of Poem. After the end of My Own Disorder the listener instantly understands the strong elements of the band. Having a tight rhythm section, great riffs and excellent melodic passes, Poem continue to write music for every mood. With attention to detail, each track has something to offer to the whole album, but at the same time they can all stand alone as separate compositions.

Once again, George Prokopiou leaves his signature on each track, with vocal performances that raise each composition a step higher. Euthanasia is an excellent example of how a good song gets even better because of the vocals with changes from sharp riffs to melodic passages and a memorable refrain (to say the least).

Poem never hid their influences. Tool, Paradise Lost, Katatonia and Porcupine Tree are some of the bands that can come to mind by listening to Unique. But Poem do not try to hide these. They proudly ‘wear’ them and add to them personality and their own signature creating something special and intimate at the same time.

The few new elements compared to Skein Syndrome are not as many in order to bring many new fans to the band. But it is something that helps to consolidate the sound of the band and expand the list of their extraordinary tracks. So what comes next can now bring new tours, new fans and the future can only be brilliant.

During the vast growth of the Greek progressive metal scene, Poem have, in my opinion, played an important role. On the one hand, that is because they have released quality albums that satisfied both the prog and the metal side, but also because they were promoting their music live quite impressively. The release of Unique comes in the best phase of their career and I think that this third album marks a significant change towards alt-prog. The compositions preserve the character of the band, namely intense rhythm guitars, substantive solos, technical drumming and melodies based on the voice of the singer, George Prokopiou, while the production is great and gives extra thickness to their tracks. The album has a homogeneity and the songs I personally enjoyed most are Four Cornered God, False Morality and Brightness of Loss, because they combine perfectly alternative metal with prog, but that does not mean that My Own Disorder (with a la Serj Tankian vocals) or Euthanasia (with the djent riffs) are not just as good. I believe Unique is a wonderful album and with it Poem escape the narrow boundaries of the Greek scene, laying the groundwork for wider recognition.