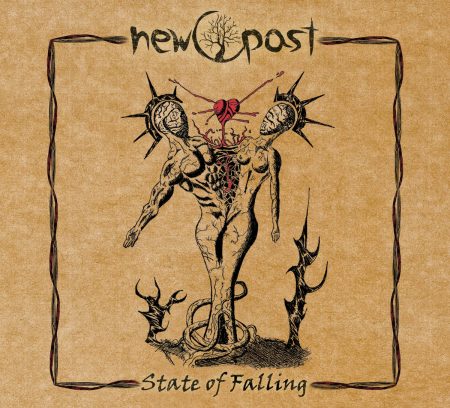 New Past were formed in 2013 as an instrumental band, and after constantly changing members, their line-up was cemented by the addition of their singer in 2016. The release of their first album State of Falling, lasting almost 39 minutes, came with the closure of 2017 crowning all these years of effort and musical fermentation.

Within a regime of blooming of the Greek scene, this group is also based in Athens, but it seems that they follow their own path in an attempt to develop a distinct sound, unusually interesting as a choice…

From the stunning opener Persephone / Descending, New Past managed to spark the audience’s interest. An oriental scale of composition, with vocals following on the same pattern, which brought to my mind the extraordinary Into The Abyss, not only because of the intense eastern element in their sound, but also due to the gothic atmosphere that is created.

As the album flows, the band unleashes its virtues and its originality. Their prog rock serves several expressions of the genre and does not hesitate to embrace elements of other genres as well, without lacking the unbelievable consistency of the atmosphere and the smooth sequence of sounds.

The compositions move in mid-tempo, without intense technical outbursts, but with a technical approach. Special mention is required to the gorgeous themes and solos of the guitar, where the atmospheric elements bring to mind, among other bands, the German Soul Cages and less Sieges Even of A Sense of Change era. Generally speaking, several European progressive bands are brought to mind. In just a few heavy spots I was reminded of Jim Matheos’s approach in the latest albums of Fates Warning. The band is based on its European origins, but it is aptly embellished with an American alternative feeling.

Andrew Denwar’s vocals are highly expressive and well-sang in English, well positioned, without any extra excitement. It would not be heretic to say that there is a doom atmosphere that is also due to the vocal melodies. I am convinced that we have not seen the full potential of the singer even though he is flawless here. The contribution of Andreas Kapeleri’s is also great by his themes on the bass (he introduces a Tool element at some points), who stands out, always in perfect cooperation with the drummer of the band, Manos Agouridis.

All above lies in a lyrical context that deals with the rise and fall of man in everyday life in the form of allegory, hence Persephone ascending from Hades and returning to the underworld (Persefone / Descending, Persefone / Ascending).

New Past is a mature band and State of Falling is a surprise album, which conceals a multitude of sounds and influences, well absorbed by its members so that they are not audible in a blatant way. I am already looking forward to their next step with high expectations. I wish this was the beginning of a great band.

State of Falling is the debut album by the Greek band New Past. These guys play some kind of retro 90s prog rock with some hints of alt and metal sound. They have some basic similarities to the band Tool and their early stuff especially in terms of dark approach and massive rhythm section but the overall sound is way more melodic.The entire album is an amazing ride, full of beautiful melodies and hooks and there no boring or repetitive moments. Denwar’s very distinctive and versatile voice keeps the songs flowing and gives each of them a unique flavor. Kostas’s stunning guitar work mirrors the lyrics on each track perfectly. His emotional solo in Break the Fetters is beyond gorgeous and it’s probably my favorite part of the whole record. The musical talent of this band cannot be denied and their future seems bright. State of Falling is highly recommended to all prog fans and I hope you enjoy the album as much as I did.