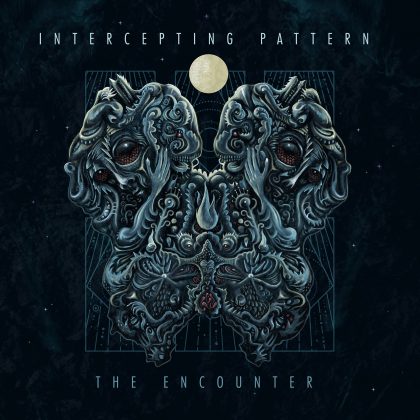 Intercepting Pattern is a newly formed band of experienced musicians. Cerebric Turmoil members Clemens Maik and Marte “McFly” Auer, and Lille Gruber (Defeated Sanity) decided to set up a project that would be based on their common brutal death metal roots, in an attempt to extend them towards jazz in an overall result that would exude something innovative. The Encounter is their debut album, and it is deserves a lot of attention for the complex music, and the bravery to attempt something so ambitious.

And now for something completely different…

Just a few days ago, a news item that quickly became viral world-famous spoke of the latest discovery in space research and the possibility of extraterrestrial life on planet Venus. Although such discoveries are usually far from what we perceive through pop culture about what aliens would look like, this one quickly managed to ignite the imagination and the hopes that we are not alone in this vast universe.

By a strange coincidence, I learned about the release of the first album of Intercepting Pattern around the same time. It was a coincidence, because The Encounter, the title of their debut, describes the encounter with another life form far from our planet. The album consists of a single track which is divided into 10 parts and during its 30-minute duration it aims to keep the listener stuck in its unique rhythms.

Extragalactic Radio begins with a dialogue in sample form about the first contact with something beyond human knowledge: the presence of an alien life form. Within seconds, the heavy and cold riffs appear to clearly recall the music of the early Meshuggah (Nothing era) and the solo work of their guitarist Fredrik Thordendal. Towards the end, the first suspicions of jazz influences appear which in the course of the album will become proofs of a brilliant fusion project.

In Signal-to-Noise, the vocals that give more intensity to their music make their appearance, while the rhythm becomes more and more experimental without losing their metal heaviness. At the same time, something mysterious continues to move on the sidelines and this sense of the unknown intensifies in Interlude I. An eerie aura of electronic music is the prelude to another powerful piece, which as it progresses is strongly reminiscent of Cynic, and the characteristic way that heavy parts intertwine with jazz rhythms.

Hypnagogia that follows is also one of the best parts of the first half of the album which is mostly instrumental. A riveting introduction with sampled conversations leading to wonderful guitar solos.

Interlude II is what seems to informally separate the album with its instrumental melodies that sound like a soundtrack and presages the heaviest parts with the vocals now permanently present.

The three parts that follows have more or less the same structure. Powerful introductions that build the pieces somewhere between Meshuggah and perhaps the genius of Allan Holdsworth which evolve into a springboard for outbursts in which the guitar and keyboards lead the way in inspired improvisations.

Epilogue leaves you with unanswered questions as its electronic melodies intensify the mystery by completing an album that on the one hand is based on old materials, but on the other hand has something new that is born from their combination (and fits perfectly in its lyrical theme). The Encounter is a surprise that can seduce friends of progressive music, but also those who want something different in heavy music, something out of the ordinary. If we take into account that this is their first album, the expectations are multiplied.

The truth is that the extreme progressive sound often gives the kiss of life to the breathless progressive metal through very interesting debuts. One of them is The Encounter by Intercepting Signal. The Germans offer a paranoid alloy of jazz, prog death metal, djent sprinkling, and space references. Imagine The Dillinger Escape Plan jamming with Blotted science, Meshuggah tuning the guitars, and jazz scores. The whole effort lasts for just 30 minute,s and as the band itself suggests, it should sound like a single composition. In fact it has so much musical information that it requires multiple hearings. The musical depth is unprecedented, and this is definitely one of the most impressive extreme metal debuts. The production is certainly not ideal, the vocals are almost annoying, and the sound on the drums is quite dry, but the compositional and technical ability of the Germans is of the highest level. If the above seem appealing to you, then check them out on YouTube and Bandcamp and support them, because they certainly have a future and more space soundscapes to offer.