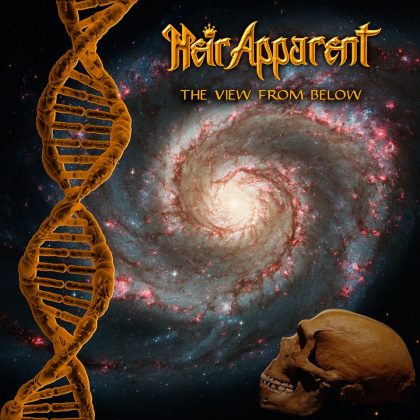 It’s quite strange to see a new album from Heir Apparent hitting the racks after many decades of absence. The time that went by from 1989 up to 2018 is quite a long one: it suffices to compare the world as it is today with the era when One Small Voice was released. When the second album of Heir Apparent came out, at the dusk of the Cold War, it was a masterpiece and in step with the then zeitgeist (when power metal was at the crest of its wave), but it wasn’t acclaimed as much as its quality called for. Today, in the third album of the band, the killer voice of Steve Βenito (who has mysteriously disappeared from the fore) is replaced by the one of Will Shaw and its release is a pleasant dissonance in the years of decadence that this scene has fallen into.

The View From Below is stuff that differs from modern trends, at times it sounds as if it has slipped through a crack in time and it pulls off to allow a fleeting look of the bygone majesty of US power. Could this album be the logical next step since One Small Voice, eliminating all these years that intervened? Refined US power immersed in the sensitivity of prog metal when it was heralded as the future of heavy music. The View From Below makes its appearance in a time when the hope for anything groundbreaking is more aged than ever.

The album is set upon the current conditions that Heir Apparent are bound to. Their sound is still melodic but more restrained compared to their previous works with the lead vocals, which do not possess the inconceivable range of their predecessor yet they are harder and equally good, as the basis. Glimpses from the past emerge through songs like the rushing Savior, or Road to Palestine and Insomnia. On the other hand there are songs like Ηere We Aren’t and Further to Father that mean to sound sentimental and they do so to some extent. Overall, the traditions of US power meet the early sound of progressive metal in a way that, no two ways about that, evokes some emotion…

Is someone vindicated if they tag the album as outdated? The answer is that it would be impermissible for music to be dictated by trends and anyone who dares to deviate from them to be labeled as obsolete. In my book, the reunion of the band bends to the purpose of developing further a sound that they were contributors to its birth. The View From Below is not simply a nostalgic return, it is the realization of the follow –up to One Small Voice which was in the back burner for years. In 2018, this continuation finally became real, in spite of all the difficulties along the way.

Truth is, The View From Below is not as majestic as the two previous albums or equally important for the history of heavy music, but it is a wonderful album under the honoured name of Heir Apparent. Despite some average moments and the overall picture that falls short of the songs from the past, yet it is music crafted with patience and love (if these two things are to be considered separately).