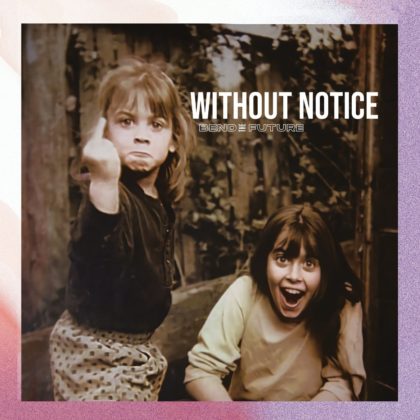 Bend the Future were formed in January 2019 in Grenoble, SE France, and ten months later they released their debut album entitled Pendellösung through the Greek Sound Effect Records. Their music is a peculiar mix of jazz and progressive rock with many oriental elements with a very tight sound. This year’s Without Notice aspires to make the quintet of Can Yıldırım (vocals, guitar), Remi Pouchain (bass), Peja Ménabé (saxophone), Piel Pawlowski (drums) and Sam Schëbre (keyboards) more widely known to the progressive rock audience. The only thing that’s certain is that Bend the Future deserve it, to say the least.

The album opens with the masterpiece Lost In Time, which begins with a great piano theme by Samy Schëbre. The song is characterized by odd time signatures and rhythm changes and is by far the greatest moment on the album. This is where the band’s image-making power comes in, as the sounds of New York’s urban landscape and jazz touches we are carried through the red sandstone deserts of the Arabian Peninsula.

As We Parry continues dynamically, based on the saxophones of Ménabé and Pawlowski and fades out with a beautiful climax of wind instruments. In Merely, all the greats of the progressive sound parade, it also has vocals (like Lost in Time), but not with the same success (we’ll come back to that later). In the second half of the song, the band presents a softer sound, creating a nostalgic atmosphere with unique ability, which however sounds like part of a different song.

The eight-minute We Aim Higher, one of the best compositions of the album, travels us on a journey with the ethereal vocal melodies that flirt with the smooth phrases of the saxophone, while the spectrum of King Crimson spreads faintly in the background.

Miniature is the shortest track here (just over 3 minutes), a melancholic break with discreet guitar themes accompanying the saxophone before the atmospheric Mus. Here the rhythm has dropped, the French rely more on the atmosphere and the melodic sounds rather than the prog outbursts.

The sophomore album of Bend the Future closes with the beautiful title track, which has similar soft, nostalgic moods with wind instrument shing once more, and the whole band contributing. Piel Pawlowski’s jazzy drumming and Schëbre’s piano but also the introductory guitar theme by Can Yıldırım which has some Japanese references are great; one of the highlights of the album.

As a whole, Without Notice has great aesthetics, it incorporates the biggest names of the progressive sound with quality and substance and has some great jazz parts. The production is perfect, as is the technical skill of the band members. The weak point on the record in my humble opinion is perhaps the use of vocals. The instrumental moments are better than the ones with vocals, while the band itself does not seem to have decided which direction to choose in relation to this. Besides, the stylistic change in the second part of the album (I found a lot of 90s and 00s influences and post-rock parts), although decent, did not reach the compositional peak of Lost In Time (and the more prog / fusion tracks in general), and was ultimately the least representative part of the album. At times you feel that a climax never comes.

Nevertheless, we are talking about a more than serious proposal for the friends of progressive rock and jazz, a combination that each time it’s successful, it leaves us with a very big promise for the future.

Lost In Time, the track that opens the album, creates such an uplift that it is impossible not to immediately pique the listener’s interest. It’s those oriental scales combined with the catchy rhythm and the way the few vocal lines are sang that make it so special.

The band plays jazz / prog rock and acquires something of the metal element through the weight and the aggressive tone that the rhythm section gives, especially the drums.

Beyond that, some compositions (Merely, We Aim Higher) have some vocals, that I would not characterize typical of the genre, but they have something of the beautiful lo-fi “naivety” of indie, but at the same time the way they stand between the complex prog themes is really interesting. The last three songs are more atmospheric, less speedy and complex, but maybe this is where the band shines even more. Miniature is my favorite track along with Lost In Time with the soft beats of the cymbals that the clear production allows to be heard, but also Without Notice with the saxophone melody bringing something of the melancholy of the folk music from Eastern Europe.

Hooffoot – The Lights in the Aisle Will Guide You